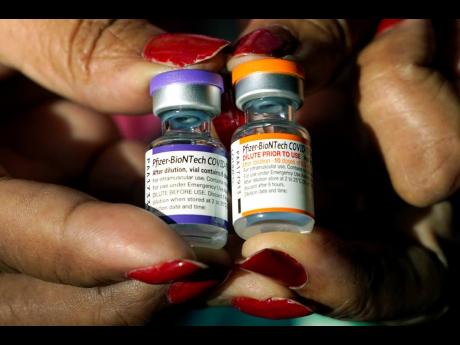 AP
FILE - A nurse holds a vial of the Pfizer COVID-19 vaccine for children ages 5 to 11, right, and a vial of the vaccine for adults, which has a different coloured label, at a vaccination station in Jackson, Miss, Tuesday, Feb 8, 2022. (AP Photo/Rogelio V. Solis, File)

After a reprieve of months, confirmed cases of COVID-19 are surging in the southern tip of South America. But officials in Argentina, Chile and Uruguay hope high vaccination rates mean this latest wave will not be as deadly as previous ones.

At the same time, there is concern that many people are not ready to once again take on the prevention measures that authorities say are needed to ensure cases remain manageable.

Cases have been steadily increasing for weeks, largely fuelled by the BA.2 version of the omicron variant. In Chile, the number of weekly confirmed cases more than doubled by late May when compared to the beginning of the month. In Argentina, cases rose 146 per cent in the same period, while in Uruguay, the increase was almost 200 per cent.

Although the number of positive tests remain far lower than in previous waves, experts say the increase in the number of confirmed COVID-19 cases is a reminder that the pandemic is far from over.

Argentina’s health minister, Carla Vizzotti, recently said that Argentina is “starting a fourth wave of COVID-19” while in Chile, Health Minister Begoña Yarza characterised the current moment as “an inflection point in the pandemic” and in Uruguay, President Luis Lacalle Pou said he was “worried” and called on everyone to be “vigilant”.

The countries are part of a regional trend as cases have been rising across the continent.

“COVID is again on the rise in the Americas,” Carissa Etienne, the head of the Pan American Health Organization, said during an online news conference last week.

For many residents in the region, the sharp increase has meant they suddenly have to think about the coronavirus again.

“There were numerous cases in my family after my birthday last week,” Marina Barroso, 40, said outside a testing centre in a Buenos Aires suburb. “The number of cases has really shot up.”

The high increase in cases has yet to translate to significant numbers of hospitalisations and deaths. Officials are crediting high vaccination rates in the region as more than 80 per cent of the population in the three countries have received at least two doses.

“We are in a very different situation from the previous waves since so much of the population is immunised,” Claudia Salgueira, the president of the Argentine Society of Infectious Diseases (SADI), said.

In Uruguay, the number of beds in intensive care units occupied by patients has doubled, from 1.5 per cent in the beginning of the month to a little more than 3 per cent by mid-May.

“Sure, mathematically we doubled the cases but we’re still talking about small numbers,” said Julio Pontet, president of the Uruguayan Society of Intensive Care Medicine who heads the intensive care department at the Pasteur Hospital in Montevideo. “What is protecting us from the serious cases is our high level of vaccination.”

In previous waves, there has been a lag between a rise in cases and hospitalisations “and it’s likely that the same thing will happen now”, said Felipe Elorrieta, a mathematical epidemiology researcher at the University of Santiago. “Still, the death toll will be lower now.”

Chile is at an advantage because it enjoys the highest level of vaccinations in the region and the highest rate of booster shots in the world with more than 80 per cent of people having at least a third dose, he said.

Chile has been able to get such a large proportion of its population to receive booster shots by essentially making life very difficult for those who eschew the shots.

Starting in June, Chile will block the “mobility pass” of any adult who received the first booster more than six months ago and has not received a second booster shot. Without the pass, Chileans are not allowed to go to restaurants, bars nor attend large events.

In other countries in the region, some are warning the vaccination campaign is lacking because of how many people have yet to receive boosters.

“There is an enormous percentage of people who don’t have the adequate vaccination, four million people only have one dose, 10 million only have two and there’s a group that does not have any,” said Hugo Pizzi, an infectious disease specialist who is a professor in the medical school at Argentina’s Córdoba National University. “There’s an apathetic, defiant attitude among the population that is really maddening.”