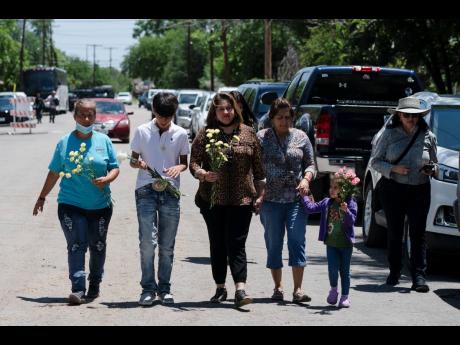 Jae C. Hong
People walk with flowers to honour the victims in Tuesday’s shooting at Robb Elementary School in Uvalde, Texas, on Wednesday. Desperation turned to heart-wrenching sorrow for families of grade schoolers killed after an 18-year-old gunman barricaded himself in their Texas classroom and began shooting, killing at least 19 fourth-graders and their two teachers.

“This travel advisory is being issued in light of the high levels of gun violence in the country,” said Amnesty International.

It further stated that travellers should be extra vigilant at all times; to avoid places where large numbers of people gather, especially cultural events, places of worship, schools, shopping malls and further to exercise increase caution when visiting local bars, nightclubs and casinos.

It further stated that, depending on the traveller’s gender, identity, race, country of origin, ethnic background or sexual orientation, they may be at a higher risk of being targeted with gun violence and should plan accordingly.

The United States has seen a number of mass shootings recently, with the latest being an attack on black customers at a Buffalo supermarket by a white 18-year old in which 10 people were shot and killed. This was followed days later by an attack on a church in California whose worshippers are mainly Koreans. One person was killed and several others wounded in this attack.

In its statement, Amnesty International said that gun violence can lead to a violation of the most fundamental human right – the right to life. States have an obligation to fight actual or foreseeable threats to life and should therefore take measures to protect people from gun violence.

“If a state does not adequately control how private individuals own and use firearms, this could amount to a breach of their obligations under international human rights law to protect the rights to life and security of person,” the statement said.

It further noted that firearm violence by private actors has a strong socio-economic dimension. It is typically concentrated in low-income urban neighbourhoods with high levels of crime. This often includes trafficking in illicit drugs, inadequate policing or policing which does not comply with international standards on human rights and law enforcement, and lack of access to public services.

Reacting to the Amnesty International statement, Dr Basil Wilson, a former professor at John Jay College of Criminal Justice in Manhattan, said that while such travel advisories are not much heeded, it is interesting that the United States find itself in this position.

Wilson, who is Jamaican, said that if taken seriously by the US government, the statement could benefit the American people.

“The social fabric of the society has been damaged by the COVID pandemic and the preponderance of guns in the society just add to the problem,” he said.

Wilson noted that there is currently a case before the Supreme Court that should the court rule against New York it would let loose even more guns in the society.

“Amnesty International statement is not far-fetched and I would love to know what will be the (US) government’s response,” he said.

Noting that mass killings in the US is higher than in most Third World countries, Wilson said that the country has lost its will to deal with the issue of gun violence. Recalling the 1994 ban on assault weapons which was allowed to expire some years ago, the John Jay former professor said that it is doubtful in the present climate that the government could enact such a ban again.

He further noted the rise in racial-bias violence and said that this was affecting the fabric of the country.

Wilson called for a rethinking of the country’s safety net to benefit people who are feeling left out and giving rise to gun violence.

Former Jamaican Ambassador to the United Nations, Curtis Ward, said that the big problem is that the country seems unable to control the types of weapons used in mass killings.

He, too, did not think that the travel advisory by Amnesty International will slow people’s visit to the United States, but said that it is interesting that such an advisory has been issued against a country like the USA.

“More and more people are concerned by these mass killings and enough is not being done to curb this violence,” said Ward.

Noting that Amnesty International is on to something, Ward said the US has a serious problem and does not seem to have the political will to tackle the problem.

According to him, any time Amnesty International puts out a travel advisory against any country it is newsworthy.

“This advisory may help to keep the narrative going in the country to find ways to curb these mass killings,” he said.

However, he noted that the advisory could be dismissed by the United States as bias against the country.

Community activist and head of Caribbean Immigrant Services, Irwine Clare, said that unlike when the USA issue a travel advisory against a country, the advisory by Amnesty has no muscle behind it and would not deter anyone from visiting the United States.

He said that it would stand to reason that anyone visiting the United States would exercise caution because of the increase in mass killings.