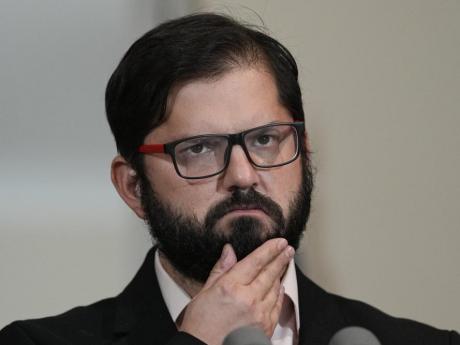 BUENOS AIRES, Argentina (AP) — Chile's president publicly apologised to a woman who was sterilised without her consent at a public hospital two decades ago because she was HIV-positive, ending a years-long legal process that included taking her case to the Inter-American Commission on Human Rights in Washington.

“It hurts to think that the state that I have the honour of representing today is responsible for these cases,” President Gabriel Boric said Thursday.

The woman has been identified only as Francisca, which is not her real name.

She was 20 years old when she became pregnant in 2002 and found out during a routine checkup that she was HIV-positive.

Francisca says she was repeatedly criticised by healthcare workers for getting pregnant while living with HIV and, while she underwent a cesarean, doctors sterilised her without her consent, which the new mother only learned about when she came out of anaesthesia.

Francisca, whose son was born HIV-negative, insists she never agreed to the sterilisation procedure claiming her dream had long been to have several children.

Despite her claims, courts in Chile dismissed her case as the doctor said she obtained verbal consent for the procedure, which Francisca denies.

“I receive the apology that the state is offering as a commitment with myself and all the people who went through a similar story,” Francisca said in a written statement. “It must be clear that I was not the only one and we still face discrimination in the healthcare system.”

The apology, which was part of the negotiated settlement that Chile sealed at the Inter-American Commission on Human Rights in August, is not just about Francisca.

“This was not an isolated case,” said Catalina Martínez Coral, regional director for Latin America and the Caribbean of the Center for Reproductive Rights, one of two NGOs that took Francisca's case to the Inter American Commission on Human Rights. “It was a systematic practice in the healthcare system.”

In a 2009 report, the Center for Reproductive Rights said many women living with HIV in Chile faced discrimination from healthcare workers, who often pushed them not to get pregnant. Many also said they were pressured to undergo a sterilisation procedure.

“The forced sterilisation of women living with HIV in Chile will no longer be able to be denied,” said Sara Araya Leyton, the head of Vivo Positivo, the other NGO that took Francisca's case to Washington.

Francisca was not at the ceremony on Thursday, saying in a letter that was read aloud that she would suffer discrimination if she publicly revealed her identity, but officials said she was watching.

“This is a day of mixed feelings for Francisca,” Martínez said. “She feels honoured and happy but it's also difficult for her to understand that so much time had to pass for this to happen.”

“I want to start by apologising to Francisca, as I understand you're on the other side of the camera, for the clear violation of your rights, and also for the denial of justice and for all the time you had to wait for this,” Boric said.

Chile recognised its responsibility for the violation of human rights before the Inter American Human Rights Commission in 2017 and agreed to pursue a negotiated settlement.