‘No future for babies’ 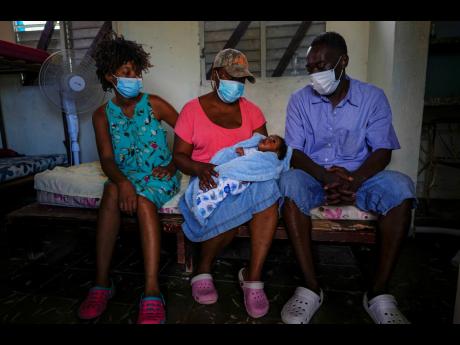 AP
Loverie Horat (left) sits by her mother holding her 24-day-old daughter Maylie Dhavavaise as her husband Maximaud Cherizad looks on, at a campground being used to house the large group of Haitian migrants with whom they are traveling, in Sierra Morena in Cuba’s Villa Clara province last week. A vessel carrying more than 800 Haitians trying to reach the United States wound up instead on the coast of central Cuba, in what appeared to be the largest group seen yet in a swelling exodus from crisis-stricken Haiti. 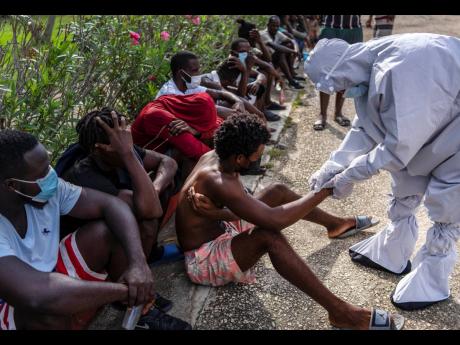 AP
A Haitian immigrant is treated by a doctor at a campground being used to house a large group of Haitian migrants in Sierra Morena in Cuba’s Villa Clara province.
1
2

Some of the more than 840 Haitians who tried to reach the United States in a boat but ended up in Cuba said Thursday that they fled violence in their country and were charged thousands of dollars by smugglers who ushered them onto a dilapidated boat and later abandoned them at sea.

It is the largest single arrival of people from Haiti on the Cuban coast amid an increasing exodus caused by gang violence and other problems there.

“They deceived us. In my case (a trafficker) told me that the boat was going to have 200 or 300 people, and on a big boat it is normal. But when you’re on board, you don’t know how many people are going to appear,” said Maximaud Cherizard, a 34-year-old engineer who travelled with a seven-year-old son, his wife and his sister.

“We were ashamed when we arrived” in Cuba, Cherizard said. The boat was so packed that some people were on the vessel’s roof, he said.

The 842 people were rescued Tuesday by the Cuban coast guard and other government services in the vicinity of Caibarien in Villa Clara province, about 300 kilometres (185 miles) east of the capital, Havana. They were taken to a temporary centre in a former summer camp and were in isolation as a health precaution.

According to the account of at least three migrants with whom the AP spoke, the group left Tortuga Island in northern Haiti after waiting there for almost two months for the trip. News of the supposed opportunity to go to Florida had spread by word of mouth and some people said they paid $4,000 each for a spot on the boat.

They were taken in a small boat to the larger one early Saturday morning and their phones were taken away by smugglers, who alleged the signal would make them detectable by the US Coast Guard, according to the migrants.

Cherizard said he had been shown a picture of a cruise liner that was going to take the migrants, a promise that he realised was false when he saw the dilapidated boat. He and other migrants said they did not see a name on the vessel.

Cherizard said he and his family were placed in a cabin with others with little access to the rest of the vessel. When the captain abandoned ship at sea early Tuesday morning, they learned that some migrants had tried to take control of the boat in an attempt to reach their destination.

Another migrant, 19-year-old Joyce Paul, said the captain had left in a smaller vessel and the one the migrants were on began to lean. The Haitians signalled with flashlights towards the Cuban coast to be rescued.

In the days at sea, 15 people threw themselves into the water as conditions grew more desperate, according to Paul.

‘YOU CAN’T GO OUT ON THE STREET’

There were 70 children, including infants, among the migrants, Cuban authorities reported.

“In Haiti, there is no future for babies,” said Loverie Horat, the 30-year-old mother of a 24-day-old infant.

She told The Associated Press that she and her husband boarded the boat after leaving Port-au-Prince, Haiti’s capital. Her comments in Creole were translated into Spanish by Cherizard.

Migrants said that insecurity and poverty in Haiti forced them to flee. Paul, the 19-year-old, said that gang members had killed his two sisters.

“You can’t go out on the street” because of the violence, Cherizard said.

Due to sea currents and winds, some smugglers’ vessels aiming to reach the United States end up on Cuban coasts. Not all arrivals are officially reported, although in recent months authorities in Havana have acknowledged an increase in arrivals. Migrants are usually returned to their home countries in accordance with binational agreements.

The Haitians arrived in Cuba at a time when the island itself is suffering from a severe economic crisis with food, medicine and fuel shortages and high emigration to the United States.

“Humanitarian aid has been a real challenge,” said Andy Borges, a member of the Civil Protection office of the municipality of Corralillo, where the Haitian camp is based.

US Coast Guard crews have intercepted some 4,500 Haitian migrants since October last year. Many tried to land on the Florida coast in overloaded boats. More than 3,000 of those migrants have been intercepted since mid-March, indicating the pace has quickened this spring.

‘’We don’t want to go back to Haiti,” said 30-year-old Leverie Horat, one of the Haitian migrants who hoped to reach the United States but ended up in Cuba.