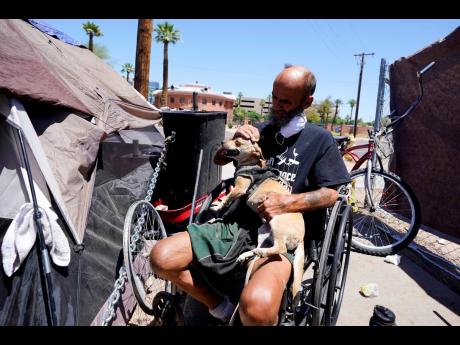 Ross D. Franklin
‘Cueball’ pets his dog Lindsay at their tent on the edge of a homeless encampment in Phoenix. Hundreds of homeless people die in the streets each year from the heat, in cities around the US and the world.

Hundreds of blue, green and grey tents are pitched under the sun’s searing rays in downtown Phoenix, a jumble of flimsy canvas and plastic along dusty sidewalks. Here, in the hottest big city in America, thousands of homeless people swelter as the summer’s triple digit temperatures arrive.

The stifling tent city has ballooned amid pandemic-era evictions and surging rents that have dumped hundreds more people onto the sizzling streets that grow eerily quiet when temperatures peak in the mid-afternoon. A heat wave earlier this month brought temperatures of up to 114 degrees (45.5 Celsius) – and it’s only June. Highs reached 118 degrees (47.7 Celsius) last year.

“During the summer, it’s pretty hard to find a place at night that’s cool enough to sleep without the police running you off,” said Chris Medlock, a homeless Phoenix man known on the streets as ‘T-Bone’ who carries everything he owns in a small backpack and often beds down in a park or a nearby desert preserve to avoid the crowds.

“If a kind soul could just offer a place on their couch indoors, maybe more people would live,” Medlock said at a dining room where homeless people can get some shade and a free meal.

Around the country, heat contributes to some 1,500 deaths annually, and advocates estimate about half of those people are homeless.

Temperatures are rising nearly everywhere because of global warming, combining with brutal drought in some places to create more intense, frequent and longer heat waves. The past few summers have been some of the hottest on record.

Just in the county that includes Phoenix, at least 130 homeless people were among the 339 individuals who died from heat-associated causes in 2021.

“If 130 homeless people were dying in any other way, it would be considered a mass casualty event,” said Kristie L. Ebi, a professor of global health at the University of Washington.

It’s a problem that stretches across the United States, and now, with rising global temperatures, heat is no longer a danger just in places like Phoenix.

This summer will likely bring above-normal temperatures over most land areas worldwide, according to a seasonal map that volunteer climatologists created for the International Research Institute at Columbia University.

Last summer, a heat wave blasted the normally temperate US Northwest and had Seattle residents sleeping in their yards and on roofs, or fleeing to hotels with air conditioning. Across the state, several people presumed to be homeless died outdoors, including a man slumped behind a gas station.

In Oregon, officials opened 24-hour cooling centres for the first time. Volunteer teams fanned out with water and popsicles to homeless encampments on Portland’s outskirts.