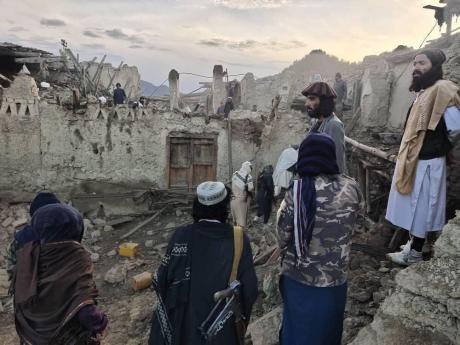 In this photo released by a state-run news agency Bakhtar, Afghans look at the destruction caused by an earthquake in the province of Paktika, eastern Afghanistan, Wednesday, June 22, 2022. (Bakhtar News Agency via AP)

Officials warned that the already grim toll may still rise.

Information from the remote area near the Pakistani border remained scarce, but early footage from villages tucked among the rough mountains showed residents picking through rubble of collapsed stone and mudbrick houses.

The disaster posed a major test for Afghanistan's Taliban government, which seized power nearly 10 months ago as the United States and its NATO allies prepared to pull out of the country and has been largely shunned by the world community since.

Rescuers rushed to the area by helicopter, but the response is likely to be complicated since many international aid agencies left Afghanistan after the Taliban takeover.

Moreover, most governments are wary of dealing directly with the Taliban, a reluctance that could slow the deployment of emergency aid and teams typically sent after such natural disasters.

In a rare move, the Taliban's reclusive supreme leader, Haibatullah Akhundzadah, who almost never appears in public, called for “the international community and all humanitarian organisations to help the Afghan people affected by this great tragedy and to spare no effort to help the affected people.”

“We ask God to save our poor people from trials and harm,” he said in a statement put out by the Taliban spokesman.

The disaster hits at a time when Afghanistan is already deep in one of the world's worst humanitarian crises, with millions facing increasing hunger and poverty after the cutoff of international financing to the Taliban.