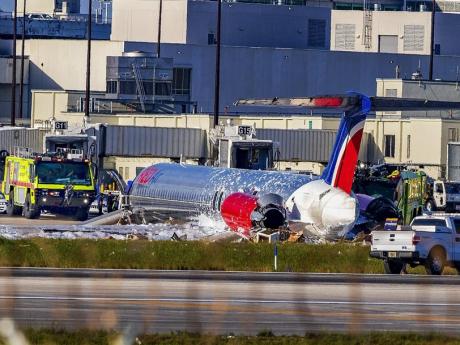 Firefighting units are seen next to a Red Air plane that caught fire after the front landing gear collapsed upon landing at Miami International Airport in Miami, after arriving from Santo Domingo, Dominican Republic, Tuesday, June 21, 2022. (Pedro Portal/Miami Herald via AP)

MIAMI (AP) — The crash landing of a jetliner that caught fire on the runway at Miami International Airport with 126 people on board had passengers screaming and panicking, witnesses said.

“People were grabbing the seats to keep from spinning around.”

Three passengers were taken to a hospital with minor injuries, while the others were bussed to the terminal, Chin said.

Passenger Paola Garcia said she thought she was going to die.

“I started running and I jumped, and I thought it was going to explode,” she told WSVN.

The plane came to a stop on the grass beside a runway, where it was doused with chemicals to put out the fire.

Emergency crews reached the plane in a minute and a half, according to Miami-Dade County Mayor Daniella Levine Cava.

“What happened here is a miracle,” the mayor told reporters.

Airport officials said in a tweet that the collapse of the front landing gear in the nose of the aircraft appeared to cause the fire.

RED Air is a low-fare airline that launched last November and only flies between Santo Domingo and Miami. The airline has four McDonnell Douglass MD-81 and MD-82 aircraft and more than 50 employees, the Herald reported.

The National Transportation Safety Board posted that a team would arrive at the airport by Wednesday to investigate.