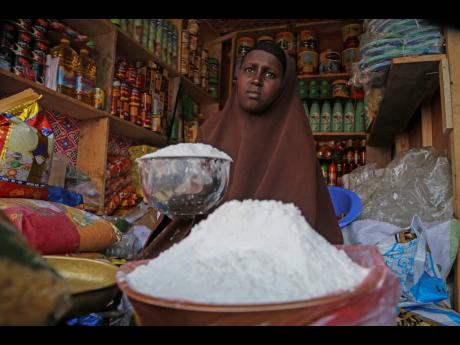 Farah Abdi Warsameh
A shopkeeper sells wheat flour in the Hamar-Weyne market in the capital Mogadishu, Somalia, on May 26.

It took weeks of requests for Zelenskyy to address African nations, many of whom retain close ties to Russia and failed to support a UN General Assembly resolution condemning the invasion earlier this year.

Ukraine and the West hope to weaken those ties by emphasising that Russia’s actions are to blame for dramatic shortages of wheat and edible oils and skyrocketing food and fuel prices across the African continent of 1.3 billion people. Russia’s blockade of Ukrainian exports is a “war crime”, the European Union’s top diplomat, Josep Borrell, said on Monday.

“They are trying to use you and the suffering of the people to put pressure on the democracies that have imposed sanctions on Russia,” Zelenskyy told the AU, whose leaders recently met in Russia with President Vladimir Putin and echoed Moscow’s assertion that Western sanctions are in part to blame for the food security crisis. They appealed to other countries to ensure grain and fertiliser exports from Russia and Ukraine aren’t blocked.

Millions of people in the Horn of Africa, including Ethiopia and Somalia, are now struggling to find food or even humanitarian food aid amid a historic drought. The AP was the first to report hundreds of deaths this year in Somalia alone.

“We know for a fact there will be increased deaths ... well into 2023,” USAID Ethiopia mission director Sean Jones told the AP last week.

Official reaction to Zelenskyy’s speech was muted. African Union Commission chair Moussa Faki Mahamat, one of those who met with Putin, tweeted that African nations “reiterated the AU position of the urgent need for dialogue to end the conflict”. Current AU chair and Senegalese President Macky Sall tweeted that Africa respects “the peaceful resolution of conflicts and the freedom of commerce”.

Russia is the largest weapons exporter to sub-Saharan Africa, and Moscow emphasises its long ties with African nations dating to the Soviet Union. Some African leaders, meanwhile, are exasperated by global powers’ efforts to choose one side or another.

Ukraine will press its case again later this week when its foreign minister speaks to Africa-based reporters in a briefing organised by the United States government on how “Russian Federation’s full-scale invasion of Ukraine affects food security on the African continent”.

The EU’s top diplomat said he has written to all African foreign ministers to explain that the bloc’s sanctions on Russia are not responsible for the looming global food crisis, and pledged to work out ways for exports of food and fertilisers to reach their continent.