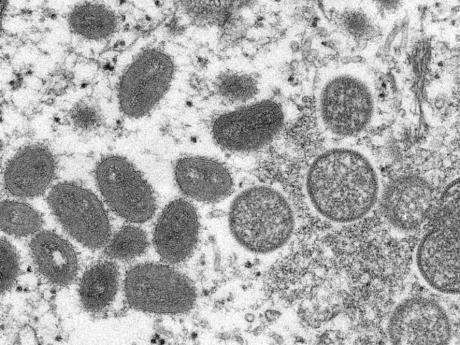 This 2003 electron microscope image made available by the Centers for Disease Control and Prevention shows mature, oval-shaped monkeypox virions (left) and spherical immature virions (right) obtained from a sample of human skin associated with the 2003 prairie dog outbreak. The World Health Organization will convene an emergency committee of experts to determine if the expanding monkeypox outbreak that has mysteriously spread outside its usual zones should be considered an international public health emergency. (Cynthia S. Goldsmith, Russell Regner/CDC via AP, file)

LONDON (AP) — The World Health Organization convenes its emergency committee Thursday to consider if the spiralling outbreak of monkeypox warrants being declared a global emergency.

But some experts say the WHO's decision to act only after the disease spilled into the West could entrench the grotesque inequities that arose between rich and poor countries during the coronavirus pandemic.

Declaring monkeypox to be a global emergency would mean the United Nations health agency considers the outbreak to be an “extraordinary event” and that the disease is at risk of spreading across even more borders, possibly requiring a global response.

It would also give monkeypox the same distinction as the COVID-19 pandemic and the ongoing effort to eradicate polio.

The WHO said it did not expect to announce any decisions made by its emergency committee before Friday.

Many scientists doubt any such declaration would help to curb the epidemic since the developed countries recording the most recent cases are already moving quickly to shut it down.

Monkeypox has sickened people for decades in central and west Africa, where one version of the disease kills up to 10% of people infected.

The version of the disease seen in Europe and elsewhere usually has a fatality rate of less than 1% and no deaths beyond Africa have so far been reported.