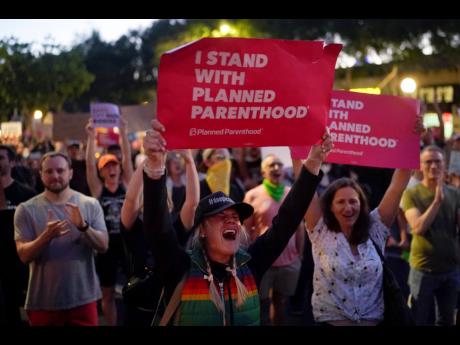 The fall of Roe v. Wade shifted the battleground over abortion to courthouses around the country on Monday as one side sought quickly to put statewide bans into effect and the other tried to stop, or at least delay, such measures.

The US Supreme Court’s decision on Friday to end constitutional protection for abortion opened the gates for a wave of litigation from all sides.

Many of the court cases will focus on “trigger laws”, adopted in 13 states in anticipation of the ruling and designed to take effect swiftly. Lawsuits could also target old anti-abortion laws that were left on the books and went unenforced under Roe. Newer abortion restrictions that were put on hold pending the Supreme Court ruling have also started to come back into play.

“We’ll be back in court tomorrow and the next day and the next day,” Nancy Northup, president and CEO of the Center for Reproductive Rights, which argued the case that resulted in the high court ruling, said Friday.

In Louisiana on Monday, a judge in New Orleans, a liberal city in a conservative state, temporarily blocked enforcement of the state’s trigger-law ban on abortion after abortion rights activists argued that it is unclear. The ruling is in effect pending a July 8 hearing.

At least one of the state’s three abortion clinics said it would resume performing procedures on Tuesday.

“We’re going to do what we can,” said Kathaleen Pittman, administrator of Hope Medical Group for Women, in Shreveport. “It could all come to a screeching halt.”

Also on Monday, abortion rights advocates asked a Florida judge to block a new law there that bans the procedure after 15 weeks with some exceptions and is set to take effect this week.

The American Civil Liberties Union of Arizona and an abortion-rights group filed an emergency motion on Saturday seeking to block a 2021 law they worry can be used to halt all abortions. Planned Parenthood in Utah has challenged a trigger law there that contains narrow exceptions.

Brigitte Amiri, deputy director of the American Civil Liberties Union’s Reproductive Freedom Project, said the organisation is looking at “all options” to protect access to abortion.

As of Saturday, abortion services had stopped in at least 11 states – either because of state laws or confusion over them.