President: A man threatened my life 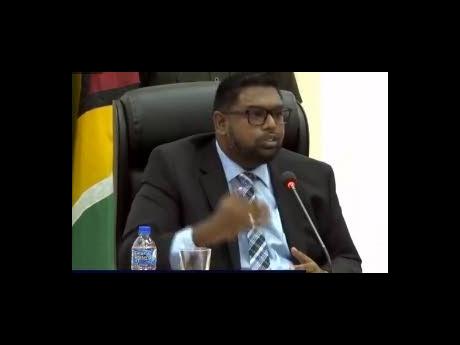 President Irfaan Ali Tuesday said that the protest by residents over the alleged release of a police officer linked to the murder of a young man “is not all about justice” and that “a man threatened my life”.

Ali in an earlier broadcast had urged residents on the East Coast Demerara to allow the Police Complaints Authority (PCA) to do its work as the Guyana Police Force (GPF) denied reports that a policeman who allegedly shot and killed a resident several days ago had been released.

“I am assured by the chairman, retired Justice Ramlall, who has advised me that by very early in the new week, he is hoping by Monday, he will be in a position to present his report to the DPP,” Ali said in a televised statement from State House.

Ali told the nation that he had also been informed that a second police officer is now in custody assisting the investigators with the probe. He maintained that the two police officers are still in custody and the probe ongoing and therefore sees no basis for the protests.

But as the protests continue, Ali in a statement on his Facebook page wrote: “Today, a man threatened my life. And, the member of parliament who filmed it did not denounce the statement.”

But he said while he has been receiving an “outpouring of love and support”, he would be “asking for the parliament to pass a unanimous resolution decrying political violence and threats of assassination.

“Because, in order to build one Guyana for all, we must speak with one voice that threats of political violence and assassination will not be tolerated in our democratic society.