NATO deems Russia its ‘most significant and direct threat’ 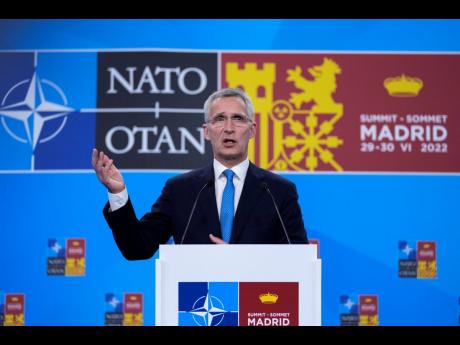 NATO declared Russia the “most significant and direct threat” to its members’ peace and security on Wednesday and vowed to strengthen support for Ukraine, even as that country’s leader chided the alliance for not doing more to help it defeat Moscow.

The military organisation’s condemnation was not wholly surprising: Its chief earlier said Russia’s war in Ukraine had created Europe’s biggest security crisis since World War II. But it was a sobering about-face for an alliance that a decade ago called Moscow a strategic partner.

NATO also issued a warning about China, accusing it of bullying its neighbours and forming a “strategic partnership” with Moscow that poses a challenge to the West.

Set up some 70 years ago to counter the Soviet Union, NATO held its summit in Madrid in a world transformed by Russia’s invasion of its neighbour. The war drove the alliance to pour troops and weapons into eastern Europe on a scale unseen in decades, and pushed Sweden and Finland to seek the safety of NATO membership.

The two formerly non-aligned nations were formally invited to join on Wednesday, as Secretary General Jens Stoltenberg said the war had brought “the biggest overhaul of our collective defence since the end of the Cold War”.

But Ukrainian President Volodymyr Zelenskyy lamented that NATO’s open-door policy to new members did not appear to apply to his country.

“The open-door policy of NATO shouldn’t resemble the old turnstiles on Kyiv’s subway, which stay open but close when you approach them until you pay,” Zelenskyy said by video link. “Hasn’t Ukraine paid enough?”

He also asked for more modern artillery systems and other weapons, and warned the leaders that they either had to provide Kyiv with the help it needed or “face a delayed war between Russia and yourself”.

“The question is, who’s next? Moldova? Or the Baltics? Or Poland? The answer is: all of them,” he said.

Zelenskyy has acknowledged that NATO membership is a distant prospect. Under NATO treaties, an attack on any of the 30 members would trigger a military response by the entire alliance, so it is trying to strike a delicate balance, letting its nations arm Ukraine without sparking a direct confrontation with nuclear-armed Russia.

At the same time, NATO has moved quickly to ensure that its members are protected, dramatically scaling up military force along its eastern flank, where countries from Romania to the Baltic states worry about Russia’s future plans.

It plans to increase by almost eightfold the size of the alliance’s rapid reaction force, from 40,000 to 300,000 troops, by next year. The troops will be based in their home nations but dedicated to specific countries in the east, where the alliance plans to build up stocks of equipment and ammunition.

US President Joe Biden, whose country provides the bulk of NATO’s military power, vowed the summit would send “an unmistakable message ... that NATO is strong and united”.

“We’re stepping up. We’re proving that NATO is more needed now than it ever has been,” said Biden. He announced a hefty boost in America’s military presence in Europe, including a permanent US base in Poland, two more Navy destroyers based in Rota, Spain, and two more F35 squadrons to the UK.