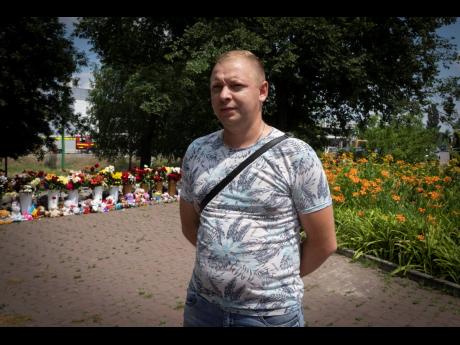 Efrem Lukatsky
Oleksandr Baybuza tells about the Russian deadly rocket attack at a shopping centre in Kremenchuk, Ukraine. Baybuza said he is searching for his brother-in-law Kostyantyn Vozniy who was working in the shopping centre and is considered missing.

How do you grieve when there is no body to be found? How do you move forward when the person you loved vanished into the dust in a matter of seconds? These are some of the unthinkable questions many in Kremenchuk are now grappling with after a Russian airstrike obliterated a busy shopping mall.

Many hoped the war would not reach as far as their city. Since the invasion, checkpoints had been erected at the entrance to the town. Air raid sirens wailed occasionally. There had been two strikes, without casualties, on an oil refinery on the outskirts of town. But for the citizens of Kremenchuk, a breezy city on the banks of the Dnipro river in central Ukraine, hundreds of kilometres from the front lines, the town offered them a sense of relative safety.

Then a Russian cruise missile crashed through the Amstor shopping mall, igniting a fierce blaze that burned through the building and those trapped inside within minutes.

Some had just stopped by the mall on their way home from work, to fix their phone or shop for clothes. But before they could register what was happening, the building became a black, choking inferno, the fire inside so hot it melted the metal and glass.

Survivors told the AP that at the time of impact there were “hundreds” of people inside the building. So far 18 people have been confirmed dead, at least 20 other people have been reported missing, while dozens are in intensive care. In the hours after the strike, local Telegram groups were filled with panicked messages asking for information about missing daughters, brothers, friends.

Among those still searching for their relative is Oleksandr Baybuza, whose brother-in-law Kostiantyn Voznyi was working inside Amstor at the time of the attack.

Baybuza told the AP that the family had no information about Voznyi’s whereabouts.

“Everyone hopes he is alive, that he is injured somewhere. Nobody is losing hope. Everyone is waiting for good news. We are very worried,” said Baybuza, his face pale and exhausted.

When the war started, Voznyi had sent his wife and children to safety abroad. He stayed in Kremenchuk, unable to leave the country due to martial law, and wound up working at an electronics store on the central aisle of the Amstor mall. Oleksandr says witnesses saw him working there that afternoon.

The family has not been able to find him at any local hospitals. DNA samples have been taken from Voznyi’s children and his father. Now begins the terrible wait.