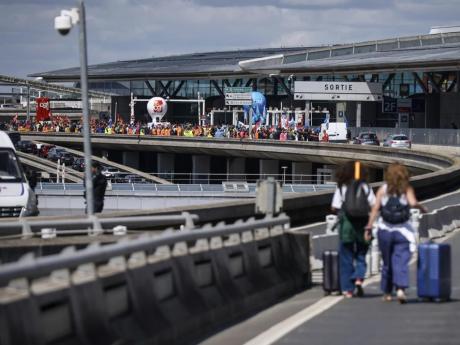 PARIS (AP) — Flights from Charles de Gaulle Airport in Paris and other French airports faced disruptions Friday as airport workers held a strike to demand salary hikes to keep up with inflation and an urgent hiring push to deal with resurgent travel demand.

The labour action is the latest trouble to hit global airports this summer, as travel resurges after two years of virus restrictions.

French airports have been largely spared the chaos seen recently in London, Amsterdam and some other European and US cities.

But on Friday, striking workers sought to call attention to the pain of inflation with a walkout on the first big day of France's domestic summer travel season.

A few hundred workers wearing union vests blocked a key road approaching Charles de Gaulle, forcing passengers to drag their suitcases by foot along a bypass to reach their terminals.

A protest was held at Orly, too.

Once inside, passengers faced big crowds and delays at check-in, passport control and security stations.

In addition to salary hikes, union activists called for an emergency recruitment plan to get airport staffing back up to pre-pandemic levels.