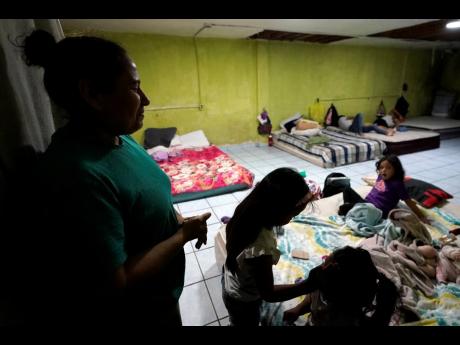 Gregory Bull
Iracema Figueroa (left), of Honduras, looks on as her children play with others at a shelter for migrants in Tijuana, Mexico, in May. The Supreme Court has ruled that the Biden administration properly ended a Trump-era policy forcing some US asylum-seekers to wait in Mexico.

The Supreme Court said Thursday the Biden administration can scrap a Trump-era immigration policy that was at the centre of efforts to deter asylum-seekers, forcing some to wait in Mexico. Two conservative justices joined their three liberal colleagues in siding with the White House.

The justices’ decision came in a case involving former President Donald Trump’s ‘Remain in Mexico’ policy, formally known as Migrant Protection Protocols (MPP), which enrolled about 70,000 people after it was launched in 2019.

President Joe Biden suspended the programme on his first day in office in January 2021. But lower courts ordered it reinstated in response to a lawsuit from Republican-led Texas and Missouri. The current administration has sent far fewer people back to Mexico than did the Trump administration.

The ruling was released on the same day that the court dealt the administration a blow in an important environmental case about the nation’s main anti-air pollution law. That ruling could complicate the administration’s plans to combat climate change.

The heart of the legal fight in the immigration case was about whether US immigration authorities, with far less detention capacity than needed, had to send people to Mexico or whether those authorities had the discretion under federal law to release asylum-seekers into the United States while they awaited their hearings.

After Biden’s suspension of the programme, Homeland Security Secretary Alejandro Mayorkas ended it in June 2021. In October, the department produced additional justifications for the policy’s demise, but that was to no avail in the courts.