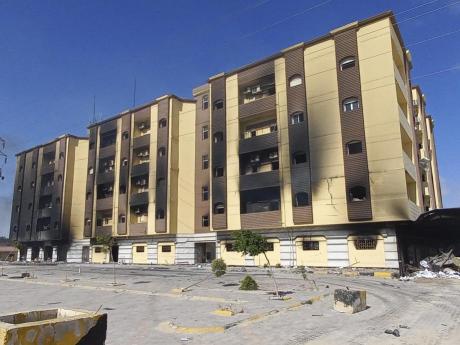 Libya's charred parliament building is seen in Tobruk, Libya, Saturday, July 2, 2022. Hundreds of protesters marched in the streets of the capital Tripoli and other Libyan cities on Friday, with many attacking and setting fire to government buildings, including the House of Representatives in the eastern city of Tobruk. (AP photo/)

Demonstrators broke into the building that houses the eastern Libya-based parliament in Tobruk on Friday, setting fire to parts of it amid protests over months of failed efforts to set the divided country on a path toward elections.

One witness, Taher Amaizig, said thousands joined a march to the parliament building calling for the current political powers to be dissolved and elections to be held. He said that as security guards tried to prevent people from entering, a protester was shot in the legs and other demonstrators then forced their way inside.

Videos circulated on social media showed protesters filing past burning piles. Friday is the first day of the weekend in Libya, meaning the building was likely empty when it was stormed. It was unclear what protesters intended by targeting the building

Other protests demanding elections were staged earlier in the day in several cities around Libya.

The unrest comes a day after representatives of Libya's rival powers — one based in the east of the country and the other in the west — failed at UN-mediated talks in Geneva to reach an agreement on a constitutional framework for national elections.

After more than a decade of war, the country is once again split between competing administrations, sliding backwards despite a year of tentative steps towards unity.

Oil-rich Libya has been wracked by conflict since a NATO-backed uprising toppled and killed longtime dictator Moammar Gadhafi in 2011, leading to a rise in rival governments.

Tobruk, the seat of Libya's House of Representatives, has long been allied with Hifter.