Palestinians give bullet that killed journalist to US team 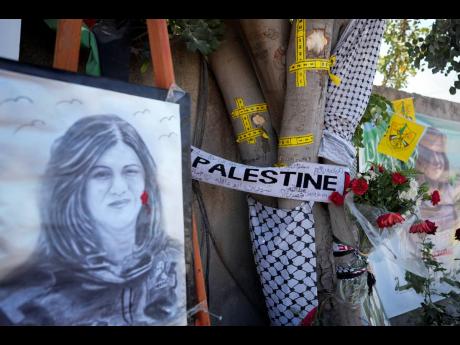 AP
Yellow tape marks bullet holes on a tree and a portrait and flowers create a makeshift memorial on May 19, 2022, at the site where Palestinian-American Al-Jazeera journalist Shireen Abu Akleh was shot and killed in the West Bank city of Jenin.

The Palestinian Authority on Saturday said it has given the bullet that killed Al Jazeera journalist Shireen Abu Akleh to American forensic experts, taking a step toward resolving a stand-off with Israel over the investigation into her death.

The announcement came just over a week before United States President Joe Biden is to visit Israel and the occupied West Bank for meetings with Israeli and Palestinian leaders. It signalled that both sides may be working to find a solution to the deadlock.

Abu Akleh, a veteran correspondent who was well known throughout the Arab world, was fatally shot while covering an Israeli military raid on May 11 in the Jenin refugee camp in the occupied West Bank.

The Palestinians, along with Abu Akleh's colleagues who were with her at the time, say she was killed by Israeli fire. The Israeli army says that she was caught in the crossfire of a battle with Palestinian gunmen, and that it is impossible to determine which side killed her without analysing the bullet.

Israel says it has identified the rifle that may have shot her, but that it cannot draw any conclusions unless it is compared to the bullet. The Palestinians have refused to turn over the bullet, saying they don't trust Israel. Rights groups say Israel has a poor record investigating shootings of Palestinians by its troops, with probes languishing for months or years before they are quietly closed.

The Palestinian attorney general, Akram al-Khateeb, said the bullet was given to US experts "for technical work".

He reiterated the Palestinian refusal to share the bullet with the Israelis, but said the Palestinians welcome the participation of any international bodies to "help us confirm the truth".

"We are confident and certain of our investigations and the results we have reached," he said.

It was not immediately clear what the American experts could discover without also studying the Israeli weapon. It also was not clear whether Israel would turn over the rifle to the Americans. The Israeli military declined comment, and US Embassy's Office of Palestinian Affairs said it had "no new information to offer".

A Palestinian official, speaking on condition of anonymity because he was discussing a diplomatic matter, said the issue was raised in a phone call between Palestinian President Mahmoud Abbas and Secretary of State Antony Blinken and that both sides hope to resolve the issue before Biden's arrival on July 13.

An AP reconstruction of events has lent support to eyewitnesses who say she was shot by Israeli troops. But a weapons expert interviewed by the AP as part of the reconstruction said that it was impossible to reach a conclusive finding without further forensic analysis. Israeli leaders have repeatedly said that soldiers did not intentionally target her.

Abu Akleh, who was 51, was a widely known and respected on-air correspondent who rose to fame two decades ago during the second Palestinian intifada, or uprising, against Israeli rule. She documented the harsh realities of life under Israeli military rule – now well into its sixth decade with no end in sight – for viewers across the Arab world.

Israeli police drew widespread criticism from around the world when they beat mourners and pallbearers at her funeral in Jerusalem on May 14. An Israeli newspaper last month reported that a police investigation found wrongdoing by some of its officers, but said those who supervised the event will not be seriously punished.

Jenin has long been a bastion of Palestinian militants, and several recent attacks inside Israel have been carried out by young men from in and around the town. Israel frequently carries out military raids in Jenin, which it says are aimed at arresting militants and preventing more attacks.

Israel captured the West Bank in the 1967 Mideast war and has built settlements where nearly 500,000 Israelis live alongside nearly three million Palestinians. The Palestinians want the territory to form the main part of a future state. Peace talks broke down more than a decade ago, and with Israel now in a new election campaign, they are unlikely to resume any time soon. The caretaker prime minister, Yair Lapid, supports a two-state solution with the Palestinians, but right-wing parties that oppose Palestinian statehood appear positioned to dominate the election.