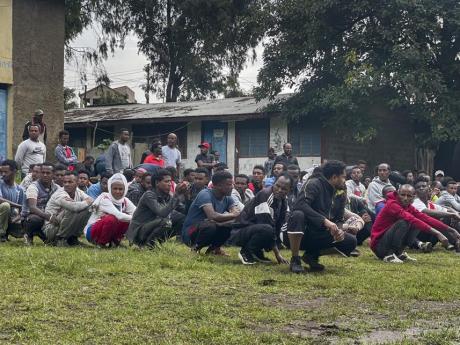 New volunteers receive basic training to become potential reinforcements for pro-government militias or military forces in a school courtyard in Gondar, in the Amhara region of northern Ethiopia on August 24, 2021. (AP Photo, File)

NAIROBI, Kenya (AP) — Ethiopia's leader reported a massacre Monday allegedly by rebels in a restive region where a rebel group opposed to his government is accused of targeting civilians amid fighting with government troops.

Prime Minister Abiy Ahmed's office didn't provide fatality figures, but the Amhara Association of America told The Associated Press, quoting sources on the ground, that it believes between 150 to 160 people might have been killed in the attacks.

The AP wasn't able to independently verify casualty figures by the association, which said ethnic Amhara people were targeted and the killings started early in the day.

“Shene group members fleeing from attacks by (government) security forces are inflicting danger on citizens in West Wellega,” Abiy said in a tweet Monday, adding operations are underway to chase the rebels.

“Citizens in the Oromia region's Qellen Wellega area have come under a massacre.”

The prime minister's announcement came three weeks after hundreds of civilians belonging to the Amhara community were killed in the same region in attacks blamed on the OLA, which the government refers to as Shene. The rebel group denied that accusation, instead accusing government forces and a local militia of carrying out the attacks.

Phone communication into the remote area has been cut since midday.

The killings will pile pressure on Abiy's government to do more to protect civilians as a wave of ethnic unrest persists in Africa's second most populous country. Attacks targeting minorities living across the country have increased in recent years because of political, historical, and ethnic tensions.