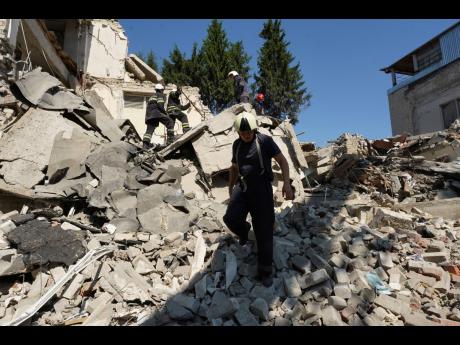 Andrii Marienko
Firefighters dig through the rubble of the school building destroyed during a missile strike in Kharkiv, Ukraine, yesterday.

Torched forests and cities burned to the ground. Colleagues with severed limbs. Bombardments so relentless, the only option is to lie in a trench, wait and pray.

Ukrainian soldiers returning from the front lines in eastern Ukraine’s Donbas region – where Russia is waging a fierce offensive – describe life during what has turned into a gruelling war of attrition as apocalyptic.

In interviews with AP, some complained of chaotic organisation, desertions and mental health problems caused by relentless shelling. Others spoke of high morale, their colleagues’ heroism, and a commitment to keep fighting, even as the better-equipped Russians control more of the combat zone.

Lt Volodymyr Nazarenko, 30, second-in-command of the Ukrainian National Guard’s Svoboda Battalion, was with troops who retreated from Sievierodonetsk under orders from military leaders. During a month-long battle, Russian tanks obliterated any potential defensive positions and turned a city with a prewar population of 101,000 into “a burnt-down desert”, he said.

“They shelled us every day. I do not want to lie about it. But these were barrages of ammunition at every building,” Nazarenko said. “The city was methodically levelled out.”

At the time, Sievierodonetsk was one of two major cities under Ukrainian control in Luhansk province, where pro-Russia separatists declared an unrecognised republic eight years ago. By the time the order to withdraw came on June 24, the Ukrainians were surrounded on three sides and mounting a defence from a chemical plant that was also sheltering civilians.

“If there was a hell on Earth somewhere, it was in Sievierodonetsk,” Artem Ruban, a soldier in Nazarenko’s battalion, said from the comparative safety of Bakhmut, 40 miles to the southwest of the since-captured city. “The inner strength of our boys allowed them to hold the city until the last moment.”

“Those were not human conditions they had to fight in. It is difficult to explain this to you here, what they feel like now or what it was like there,” Ruban said, blinking in the sunlight. “They were fighting until the end there. The task was to destroy the enemy, no matter what.”

Nazarenko, who also fought in Kyiv and elsewhere in the east after Russia invaded Ukraine, considers the Ukrainian operation in Sievierodonetsk “a victory” despite the outcome. He said the defenders managed to limit casualties, while stalling the Russian advance for much longer than expected, depleting Russia’s resources.

“Their army incurred huge losses, and their attack potential was obliterated,” he said.

Both the lieutenant and the soldier under his command expressed confidence that Ukraine would take back all occupied territories and defeat Russia. They insisted that morale remained high. Other soldiers, most with no combat experience before the invasion, shared more pessimistic accounts, while insisting on anonymity or using only their first names to discuss their experiences.

Oleksiy, a member of the Ukrainian army who started fighting against the Moscow-backed separatists in 2016, had just returned from the front with a heavy limp. He said he was wounded on the battlefield in Zolote, a town the Russians also have since occupied.

“On the TV, they are showing beautiful pictures of the front lines, the solidarity, the army, but the reality is very different” he said, adding that he does not think the delivery of more Western weapons would change the course of the war.

His battalion started running out of ammunition within a few weeks, Oleksiy said. At one point, the relentless shelling kept the soldiers from standing up in the trenches, he said, exhaustion visible on his lined face.

A senior presidential aide reported last month that 100 to 200 Ukrainian troops were dying every day, but the country has not provided the total number killed in action. Oleksiy claimed his unit lost 150 men during its first three days of fighting, many from a loss of blood.

Due to the relentless bombardments, wounded soldiers were only evacuated at night, and sometimes they had to wait up to two days, he said.