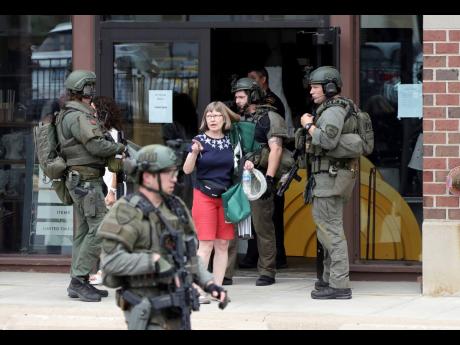 Brian Cassella
Law enforcement officers help evacuate people from an Anthropologie store in Highland Park, Illinois, on Monday, after a shooter fired on the northern suburb’s Fourth of July parade.

A gunman on a rooftop opened fire on an Independence Day parade in suburban Chicago on Monday, killing at least six people, wounding 24 and sending hundreds of marchers, parents with strollers and children on bicycles fleeing in terror, police said. The suspect remained on the loose hours later as authorities scoured the area.

Highland Park Police Commander Chris O’Neill, the incident commander on scene, urged people to shelter in place as authorities search for the suspect. He said Monday afternoon that a “very active apprehension effort” was underway.

The July 4 shooting was just the latest to shatter the rituals of American life. Schools, churches, grocery stores and now community parades have all become killing grounds in recent months. This time, the bloodshed came as the nation tried to find cause to celebrate its founding and the bonds that still hold it together.

Mayor Nancy Rotering said the violence “has shaken us to our core,” adding, “On a day that we came together to celebrate community and freedom, we are instead mourning the tragic loss of life and struggling with the terror that was brought upon us.”

The shooting occurred at a spot on the parade route where many residents had staked out prime viewing points early in the day for the annual celebration. Dozens of fired bullets sent hundreds of parade-goers — some visibly bloodied — fleeing. They left a trail of abandoned items that showed everyday life suddenly, violently disrupted: A half-eaten bag of potato chips; a box of chocolate cookies spilled onto the grass; a child’s Chicago Cubs cap.

“There’s no safe place,” said Highland Park resident Barbara Harte, 73, who had stayed away from the parade fearing a mass shooting, but later ventured from her home.

Lake County Major Crime Task Force spokesman Christopher Covelli said at a news conference “several of the deceased victims” died at the scene and one was taken to a hospital and died there. Police have not released details about the victims or wounded.

Lake County Coroner Jennifer Banek said the five people killed at the parade were adults and she doesn’t have information on the sixth victim who was taken to a hospital and died there.

Authorities said the shooter opened fire around 10:15 a.m., when the parade was about three-quarters through.

Covelli said the gunman apparently used a “high-powered rifle” to fire from a spot atop a building where he was “very difficult to see”. He said the rifle was recovered at the scene.