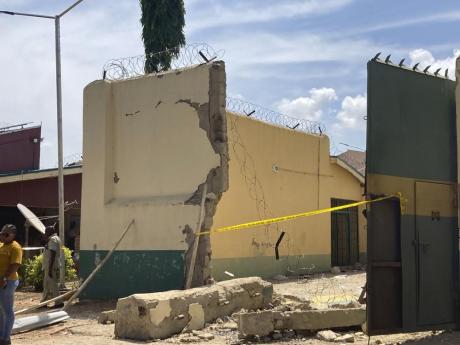 Broken walls are seen at the Kuje maximum prison in Abuja after a rebel attack, Wednesday, July 6, 2022. At least 600 inmates escaped in a jailbreak in Nigeria's capital city, officials said Wednesday, blaming the attack on Islamic extremist rebels. About 300 have been recaptured, authorities said. (AP Photo/Chinedu Asadu)

Over 300 escapees have either been recaptured or turned themselves in at police stations, authorities said.

The “very determined” rebels attacked the Kuje maximum prison in Abuja on Tuesday night with “very high-grade explosives,” killing one guard on duty, according to Shuaib Belgore, permanent secretary of Nigeria's Ministry of Interior.

Explosions and gunfire were heard at about 10:00 p.m. in the Kuje area when the attackers arrived and forced their way into the prison through a hole created by the blasts.

The Islamic extremist rebels who attacked the prison have waged an insurgency in the country's northeast for over a decade.

Their attack on the detention facility freed many of their members who are inmates, prison officials said.

“We understand they are Boko Haram. They came specifically for their co-conspirators,” said Belgore.

The Kuje maximum security prison had nearly 1,000 inmates including 64 suspects of the Boko Haram extremist group all of whom have escaped, said Major General Bashir Salihi Magashi, Nigeria's Minister of Defence.

He told reporters that security officials on the ground did “their best” to prevent the jailbreak. “We are trying to see what we can do to ensure that all escapees are brought back,” he said.

As of Wednesday morning, bullet shells lay scattered around the prison premises while helicopters hovered over the Kuje area as security agents combed nearby bushes in search of escapees.