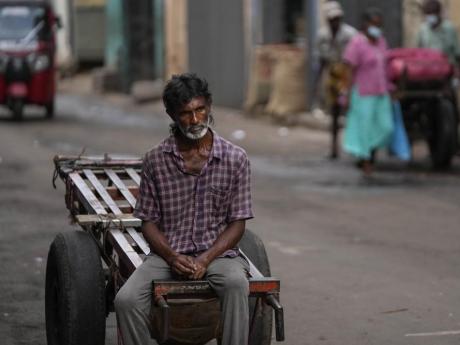 A daily wage labourer waits for work at a wholesale market in Colombo, Sri Lanka, Sunday, June 26, 2022. Sri Lankans have endured months of shortages of food, fuel and other necessities due to the country's dwindling foreign exchange reserves and mounting debt, worsened by the pandemic and other longer-term troubles. Some 1.6 billion people in 94 countries face at least one dimension of the crisis in food, energy and financial systems, according to a report last month by the Global Crisis Response Group of the United Nations Secretary-General. (AP Photo/Eranga Jayawardena, File)

DUBAI, United Arab Emirates (AP) — A staggering 71 million more people around the world are experiencing poverty as a result of soaring food and energy prices that climbed in the weeks following Russia's invasion of Ukraine, the United Nations Development Program said in a report Thursday.

The UNDP estimates that 51.6 million more people fell into poverty in the first three months after the war, living off $1.90 a day or less.

This pushed the total number globally at this threshold to 9% of the world's population.

An additional 20 million people slipped to the poverty line of $3.20 a day.

In low-income countries, families spend 42% of their household incomes on food but as Western nations moved to sanction Russia, the price of fuel and staple food items like wheat, sugar and cooking oil soared.

Ukraine's blocked ports and its inability to export grains to low-income countries further drove up prices, pushing tens of millions quickly into poverty.

“The cost of living impact is almost without precedent in a generation... and that is why it is so serious,” UNDP Administrator Achim Steiner said at the launch of the report.

The speed at which this many people experienced poverty outpaced the economic pain felt at the peak of the pandemic.

The UNDP noted that 125 million additional people experienced poverty over about 18 months during the pandemic's lockdowns and closures, compared with more than 71 million who hit poverty in just three months after Russia's invasion of Ukraine in late February.

“The speed of this is very quick,” said George Molina, UNDP chief economist and author of the report.

More people in these countries, some of which have been roiled by political turmoil like Sudan and Sri Lanka, are facing poverty, according to the UNDP. In countries like Afghanistan, Ethiopia, Mali, Nigeria and Yemen, the effects of inflation are felt deeply by those already at the lowest poverty line.

The total number of people living in poverty, or are vulnerable to poverty, stands at over 5 billion, or just under 70% of the world's population.