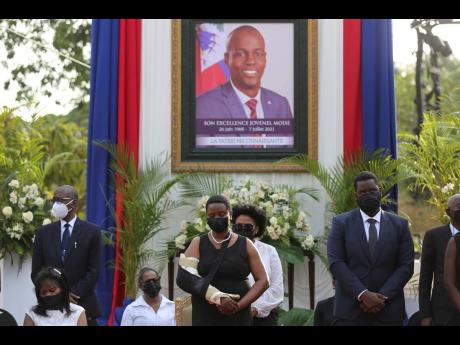 One of the main suspects in the 2021 assassination of Haitian President Jovenel Moïse pleaded not guilty on Wednesday in a federal court in Miami.

Businessman Rodolphe Jaar is charged with conspiracy to commit murder or kidnapping outside the United States and with providing material support resulting in death. If convicted, Jaar faces a maximum sentence of life imprisonment.

At a hearing that lasted less than five minutes at a downtown federal court in Miami, magistrate Judge Chris M. McAliley accepted Jaar’s plea and his request for a jury trial.

Jaar, 49, was present at the hearing, but did not speak. His attorney, Frank Schwartz, requested the government to present all the evidence that it has.

The businessman, a dual Haitian-Chilean citizen, looked serious but calm. His hair was pulled back in a small ponytail and he was wearing a beige prison uniform. He was handcuffed, with shackles on his ankles and had a face mask that covered his beard.

His plea came almost a year after a squad allegedly made up of former Colombian soldiers, Haitian police officers and others went to the president’s residence and killed him on July 7, 2021.

The Haitian government, meanwhile, has arrested more than 40 people for alleged involvement in the murder, including 18 former Colombian soldiers.

Jaar, who remains in federal prison in South Florida, arrived in the United States in January after being detained in the Dominican Republic. According to the US authorities, he voluntarily agreed to be transferred to Miami to face the charges.