Bank of England predicts recession at the end of the year 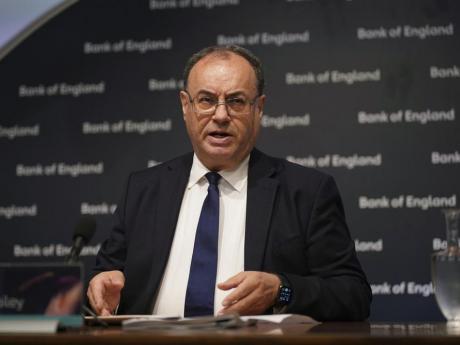 Governor of the Bank of England, Andrew Bailey, speaks during the Bank of England's financial stability report press conference, at the Bank of England, London, Thursday, August 4, 2022. The Bank of England says the United Kingdom’s economy is projected to enter a recession in the final three months of the year. The bank said Thursday that inflation will accelerate to over 13% in the fourth quarter and remain “very elevated,” for much of 2023. (Yui Mok/Pool Photo via AP)

LONDON (AP) — The Bank of England projected Thursday that the United Kingdom's economy will enter a recession at the end of the year as it hiked interest rates by the largest amount in more than 27 years, pushing to tame accelerating inflation driven by the fallout from Russia's war in Ukraine.

The rate hike of three-quarters of a point pushes the bank's key interest rate to 1.75%, the highest since the depths of the global financial crisis in December 2008.

“There is an economic cost to the war,” Bailey said at a news conference.

“But I have to be clear, it will not deflect us from setting monetary policy to bring inflation back to the 2% target.”

The bleak outlook in the world's fifth-largest economy shows the ripple effect of the war, with people mired in a cost-of-living crisis that has surged the cost of everything from groceries to utility bills.

And it lays bare the difficult position that central banks worldwide are facing: how to control surging inflation without tipping economies into a recession that were just beginning to recover from the coronavirus pandemic.

In the UK, inflation will accelerate to over 13% in the final three months of the year and remain “very elevated” for much of 2023, the bank said. The forecast reflects a sharp increase from the 40-year high of 9.4% recorded in June.

The bank's forecasters say inflation will hit its highest point for more than 42 years amid the doubling of wholesale natural gas prices tied to the war. Those energy prices will push the economy into a five-quarter recession — with gross domestic product shrinking each quarter in 2023.

Central banks around the world are making borrowing costs higher for consumers, businesses and the government, which tends to reduce spending and ease rising prices. But such moves are also likely to slow economic growth.