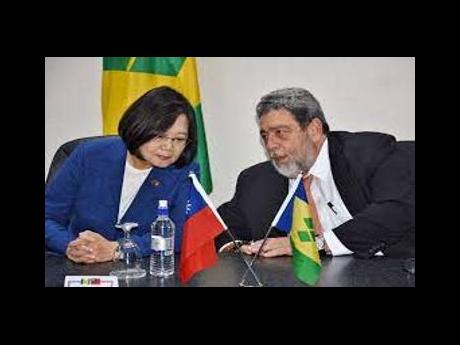 Prime Minister Dr Ralph Gonsalves left here on Wednesday for an official visit to Taiwan, urging China to desist from conducting military exercises near the Asian country that it regards as a renegade province.

“I want to say that the government of St Vincent and Grenadines (SVG) is calling upon the People’s Republic of China to desist from the military exercises, designed to threaten or intimidate the people of Taiwan,” said Gonsalves, who will be on a one-week visit to Taiwan, after spending two days in New York.

St Vincent and the Grenadines is among a handful of Caribbean Community (CARICOM) countries that have established diplomatic relations with Taiwan, despite China’s call for countries to recognise its One China policy.

China has announced military exercises near Taiwan following Tuesday’s visit to Taipei by Speaker of the US House of Representatives, Nancy Pelosi, amid opposition from Beijing.

While many Taiwanese welcomed the visit, a small group of protesters, including those who support unification with China, stomped on American flags and held up signs disparaging Pelosi and urging the US delegation to go home, the Washington Post reported.

Gonsalves, speaking on the state-owned NBC Radio from Argyle International Airport, as he prepared to depart the island, said that SVG, which has had diplomatic relations with Taiwan since 1981, believes in the peaceful settlement of disputes.

“There has been a dispute since 1949 between mainland China and Taiwan. Both peoples of Taiwan and of Mainland China are part of the Chinese civilisation,” Gonsalves said.

“And whatever the challenge, the contradictions, the difficulties, the problems between those two peoples in those two territories of the same civilisation, it is for them to sort out their problems peacefully.”

China claims Taiwan, a self-ruled island of 23 million people, as a part of its territory and has pledged to use military force if Taipei declares independence.

Prime Minister Gonsalves said Beijing’s response to Pelosi’s visit was “surely excessive”, adding, “… all this sabre-rattling, it does nothing for world peace”.