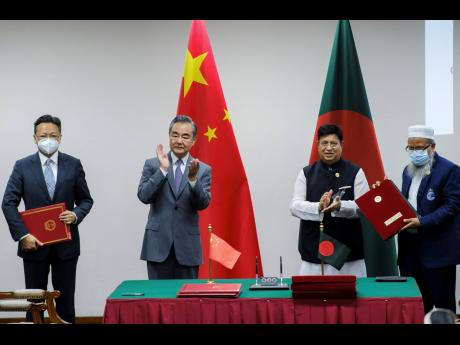 Bangladesh sought cooperation from China to repatriate Rohingya refugees to Myanmar during a visit by Foreign Minister Wang Yi, who promised better trade ties, investment and support for infrastructural development in the south Asian nation.

China had used its influence in Myanmar to broker a November 2017 agreement to repatriate about 700,000 Rohingya Muslim refugees who fled persecution in Myanmar in August that year. Despite attempts to send them back, the refugees refused, fearing danger in Myanmar, which was exacerbated by the military take-over last year.

Bangladesh has strong relations with China, which is a major trade partner mostly for raw materials. But maintaining close ties with Beijing is challenging for Bangladesh, which also balances diplomatic and trade relationship with both India and the United States, China’s main rivals.

More than 500 Chinese companies are active in Bangladesh. China is involved in the country’s all major infrastructure projects such as seaports, a river tunnel and highways, and helped built its largest bridge over the River Padma at a cost of US$3.6 billion.

Amid recent tensions between China and Taiwan, Bangladesh issued a statement reiterating its support for the “one-China” policy. After winning elections in 2008, Hasina’s administration closed the Taiwanese business representative office in Dhaka in response to a request from China, and since then China has increased its engagement in Bangladesh.

Analyst Munshi Faiz Ahmad, who served as Bangladeshi ambassador in Beijing, said that Yi’s visit was very significant for both countries.

“To us, China is very important. We also need to maintain good relations with both India and the United States as they are also very important development partners of Bangladesh. There is nothing to be afraid of because of Bangladesh’s close ties with China,” he said.