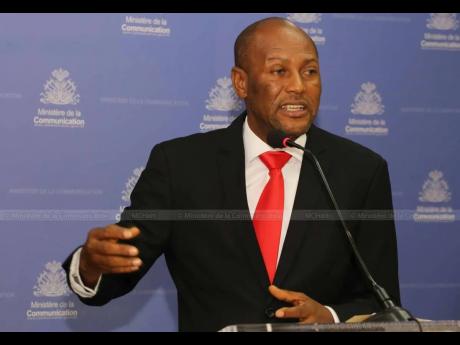 Senate President Joseph Lambert says former Senator Yvon Buissereth, who was assassinated over the weekend, had “loved Haiti” and that the French-speaking CARICOM country cannot continue to allow armed gangs and other criminals to operate freely.

“The leader of the TiMakak gang had him killed and his body burned in Laboule. Another shocking murder that continues to bring tears to our eyes. Yvon Buissereth loved Haiti. Condolences to all his family and friends.”

Lambert described the killing as a “barbaric act”, adding that “his assassins, as well as all the other criminals who sow mourning in the country, will be prosecuted to the full extent of the law, and must respond for their ignominious acts before justice”.

Government Commissioner Jacques Lafontant said the bodies of Buissereth and his nephew were found on Saturday afternoon in the community of Laboule, in close vicinity to the town of Pelerin, where President Jovenel Moïse was assassinated on July 7 last year at his private residence.

Buissereth, director of Haiti’s Public Company for the Promotion of Social Housing, and his nephew were travelling in a government-issued vehicle. Their bodies were later found inside the charred vehicle.

Lafontant said the Ti Makak gang, which means ‘Little Macaques’, is fighting with the Toto gang over control of that area.

Former Senator Youri Latortue said he is trying “to understand what led to such a crime”.

“Senator Buissereth, a peaceful man, was my colleague and friend. The grief at the news of his assassination is immeasurable. Courage to his bereaved and shocked family – words fail me to express my sorrow.”

Another former legislator and President of the FUSION Party, Edmonde Supplice Beauzile said, “In mourning your departure, I didn’t sleep last night.

“This cruelty, how to explain it? The dehumanisation of the Haitian man! I share the point of view expressed by Guichard. Act government, no one will do it for us.”

The director of the Ministry of Communication, Calvin-Karl Cadet, said, “The odious assassination of my colleague from the EPPLS, former Senator Yvon Buissereth, revolts me to the highest degree. Such heinous crimes must be banned in our society. I offer my condolences to the Buissereth family and to that of the other victim of this tragedy,” he added.