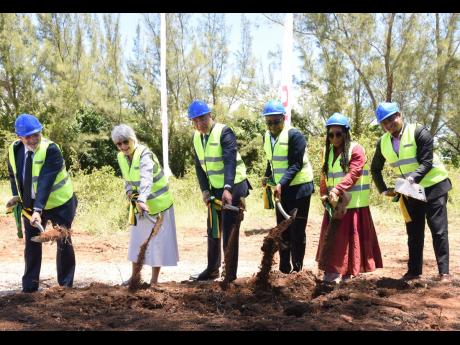 THE MOVE by migrating workers at a hotel construction site in Coopers Pen, Trelawny, to illegally construct makeshift homes and live on lands owned by the National Housing Trust (NHT) has sparked security and health concerns.

The Trelawny police are aware of the illegal activity and have moved to curb the establishment of a growing squatter community, noting that persons there are living in undesirable conditions, including a mother and her child.

Superintendent of Police Winston Milton said that living conditions are so bad that they have had to take the child to the Child Protection and Family Service Agency (CPFSA).

“We are aware of the activity and have moved in,” Milton informed The Gleaner. “Police and soldiers visited the site and noted what was going on.

“During the visit by the officers, families were observed living in the most undesirable condition. A mother and child was taken to the Child Protection and Family Service Agency,” he added.

When contacted, a CPFSA officer explained that the agency is investigating the matter and that it is likely that it could end up in court.

“An investigation is ongoing on the matter. At the end it may be taken to court for a judge to make a ruling,” he said.

According to Milton, the migration of people to the parish has raised security concerns, following a couple murders that took place recently. This, he noted, has forced the police to place more emphasis on persons migrating to the parish.

“In recent times two murders have been committed by people who have come to live in the parish, one including a shooting and another a stabbing,” he stated. “We just have to be even more vigilant at this time.”

Another person who has expressed concern about the squatting situation is Garth Wilkinson, councillor for the Coopers Pen Area, where the development is taking place. He is of the view that if the settlement is not demolished, then it could escalate into a more serious matter.

“As it now stands, we are playing with fire. A number of government agencies must get out and do the work they have been mandated to do,” Wilkinson charged. “These include public health, solid waste authority and the municipal corporation.

“These people (squatters) have no toilet facility and dispose their waste in a manner that could cause problems,” Wilkinson warned.

The squatting activity borders on the gated housing community of Florence Hall and residents there are also not comfortable with the location of the growing squatter community. In fact, one resident, who did not directly attribute the incident to persons living in the squatter settlement, told The Gleaner that her home was recently broken into.

“I am not saying these people are responsible, but the fence was cut, through which thieves walked. They stole my television and laptop computer. I am uncomfortable with what is happening,” she said.