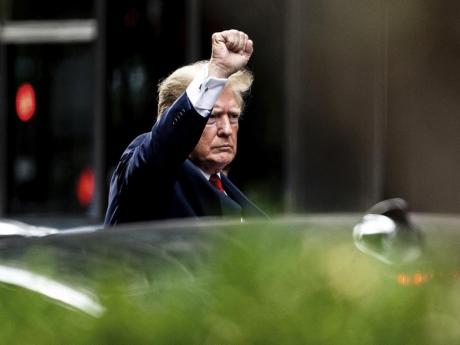 Former President Donald Trump gestures as he departs Trump Tower, Wednesday, August 10, 2022, in New York, on his way to the New York attorney general's office for a deposition in a civil investigation. (AP Photo/Julia Nikhinson)

Trump arrived at state Attorney General Letitia James' offices in a motorcade shortly before 9 a.m., before announcing more than an hour later that he “declined to answer the questions under the rights and privileges afforded to every citizen under the United States Constitution.”

“I once asked, 'If you're innocent, why are you taking the Fifth Amendment?' Now I know the answer to that question,” the statement said.

“When your family, your company, and all the people in your orbit have become the targets of an unfounded politically motivated Witch Hunt supported by lawyers, prosecutors and the Fake News Media, you have no choice.”

As vociferous as Trump has been in defending himself in written statements and on the rally stage, legal experts say the same strategy could have backfired in a deposition setting because anything he says could potentially be used in the parallel criminal investigation pursued by the Manhattan district attorney.

Wednesday's events unfolded as a flurry of legal activity surrounds the former president — just days before, FBI agents searched his Mar-a-Lago estate in Florida as part of an unrelated federal probe into whether he took classified records when he left the White House.