In race to win, Conservatives accused of ignoring crises 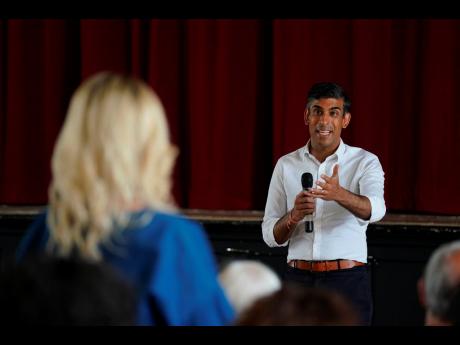 Owen Humphreys
Rishi Sunak at an event in Ribble Valley, as part of the campaign to be leader of the Conservative Party and the next prime minister of England, on Monday, August 8.

As Britain swelters through a roasting summer, and braces for a cold financial reckoning in the fall, calls for the Conservative government to act are getting louder.

But the Conservatives are busy choosing a new leader, through a prolonged party election whose priorities often seem remote from the country’s growing turmoil.

Britons’ energy bills have soared – and further hikes are coming – as the war in Ukraine squeezes global oil and gas supplies. The Bank of England is predicting a long, deep recession later this year alongside 13 per cent inflation. Meanwhile, temperatures in Britain hit 40 degrees Celsius (104 degrees Fahrenheit) in July for the first time ever, and millions are facing limits on water use as England’s green and pleasant land dries to a desiccated brown.

There is little sense of crisis among Conservatives as Foreign Secretary Liz Truss and former Treasury chief Rishi Sunak criss-cross the country wooing the 180,000 party members who will choose a successor to departing Prime Minister Boris Johnson. Under Britain’s parliamentary system, the winner of the Tory leadership race – to be announced on September 5 – will also become prime minister, without the need for a national election.

Conservative members are largely middle-age or older, mostly middle-class or affluent, and their views don’t always reflect those of the country as a whole.

“I’d like to see some true Conservative policies,” said Helen Galley, a lawyer and local Conservative official attending a candidates’ meeting in the English seaside town of Eastbourne. “Low taxation, smaller state, less regulation, freeing industry and commerce from EU regulations … . Some self-reliance and sense of responsibility for yourself.”