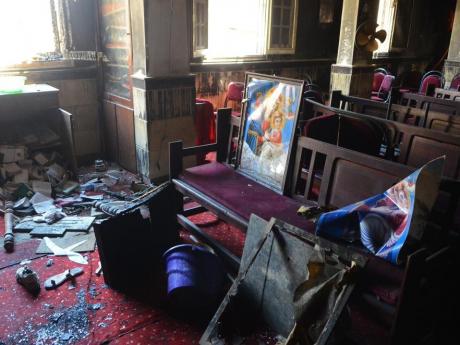 Burned furniture, including wooden tables and chairs, and religious pictures are seen at the site of a fire inside the Abu Sefein Coptic church that killed at least 40 people and injured some 14 others, in the densely populated neighborhood of Imbaba, Cairo Egypt, Sunday, August 14, 2022. The church said the fire broke out while a service was underway. The cause of the blaze was not immediately known. An initial investigation pointed to an electrical short-circuit, according to a police statement. (AP Photo/Tarek Wajeh)

CAIRO (AP) — A fire ripped through a packed church during morning services in Egypt's capital on Sunday, killing at least 41 worshippers and injuring 14.

“Suffocation, suffocation, all of them dead,” said a distraught witness, who only gave a partial name, Abu Bishoy.

The cause of the blaze in the Abu Sefein church in the working-class neighbourhood of Imbaba was not immediately known.

An initial investigation pointed to an electrical short-circuit, according to a police statement.

Footage from the scene circulated online showed burned furniture, including wooden tables and chairs. Firefighters were seen putting out the blaze while others carried victims to ambulances.

Families waited for word on relatives who were inside the church.

Witnesses said there were many children inside the building when the fire broke out.