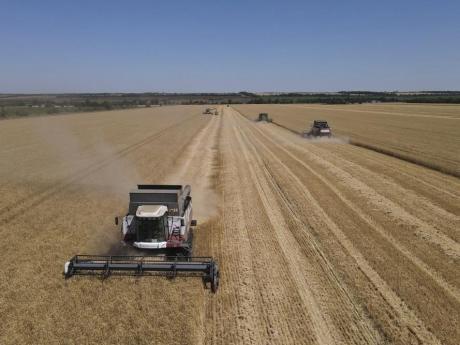 Harvesters collect wheat in Semikarakorsky District of Rostov-on-Don region near Semikarakorsk, Southern Russia, Monday, July 18, 2022. Russia is the world's biggest exporter of wheat, accounting for almost a fifth of global shipments. It is expected to have one of its best-ever crop seasons this year. Agriculture is among the most important industries in Russia, accounting for around 4% of its GDP, according to the World Bank. (AP Photo)

With much fanfare, ship after ship loaded with grain has sailed from Ukraine after being stuck in the country's Black Sea ports for nearly six months.

More quietly, a parallel wartime deal met Moscow's demands to clear the way for its wheat to get to the world, too, boosting an industry vital to Russia's economy that had been ensnared in wider sanctions.

While the United States and its European allies work to crush Russia's finances with a web of penalties for invading Ukraine, they have avoided directly sanctioning grains and other goods that feed people worldwide.

Russian and Ukrainian wheat, barley, corn and sunflower oil are important to countries in Asia, Africa and the Middle East, where millions rely on subsidised bread for survival. As the war spiked food and energy prices, millions of people have been pushed into poverty or closer to the brink of starvation.

Two deals that the United Nations and Turkey brokered last month to unblock food supplies depend on each other: one protects ships exporting Ukrainian grain through the Black Sea and the other assures Russia that its food and fertiliser won't face sanctions, safeguarding one of the pillars of its economy and helping ease concerns from insurers and banks.

The agreement allowed a Western shipper to move two vessels of grain out of Russia in a matter of weeks. It used to take months because Western banks refused to transfer payments to Russia.