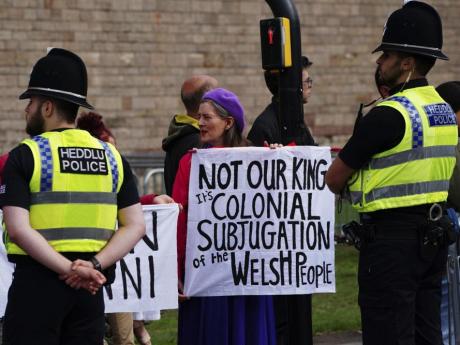 LONDON (AP) — In a country famed for irreverence, some worry a new code of silence has taken hold.

Since the death of Queen Elizabeth II, a handful of people in Britain have been detained by police for expressing — often bluntly — anti-monarchy views.

A woman in Edinburgh holding a sign reading “F—— imperialism, abolish the monarchy” was charged with a breach of the peace.

A man faced the same charge after he heckled Prince Andrew as the queen's hearse travelled through the Scottish capital.

In Oxford, peace activist Symon Hill was put in handcuffs after he shouted his opposition during a ceremonial proclamation of the new king.

Hill said he spontaneously called out “Who elected him?” because he objects to a head of state being imposed on the country.

“I doubt most of the people in the crowd even heard me,” he wrote on his blog.

“Two or three people near me told me to shut up.”

Hill said he was put into a police van by officers who told him he was being detained for alleged behaviour that could cause “harassment, alarm or distress.”

He was later released but could still face questioning.

“The police abused their powers to arrest someone who voiced some mild opposition to a head of state being appointed undemocratically,” he said.

In London, a woman was moved from the gates of Parliament while carrying a “Not my king” sign. Police said she was removed from the spot, where a police officer was stabbed to death by an Islamist attacker in 2017, to allow vehicles in and was not asked to leave the wider area.

Lawyer Paul Powlesland said he was questioned by police outside Parliament on Monday while carrying a blank piece of paper on which he, too, planned to write “Not my king.”