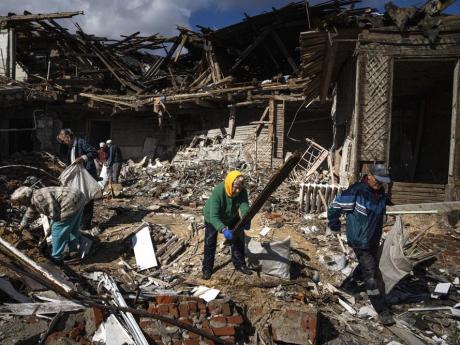 Local residents collect wood for heating from a destroyed school where Russian forces were based, in the recently retaken area of Izium, Ukraine, Monday, September 19, 2022. Residents of Izium, a city recaptured in a recent Ukrainian counteroffensive that swept through the Kharkiv region, are emerging from the confusion and trauma of six months of Russian occupation, the brutality of which gained worldwide attention last week after the discovery of one of the world's largest mass grave sites. (AP Photo/Evgeniy Maloletka)

The concerted and quickening Kremlin-backed efforts to swallow up four regions could set the stage for Moscow to escalate the war against Ukrainian forces successfully battling to wrest back territory.

The announcements of referendums starting Friday in the Donetsk, Luhansk, Kherson and partly Russian-controlled Zaporizhzhia regions came after a close ally of Russian President Vladimir Putin said votes were needed, as Moscow loses ground in the war that began nearly seven months ago.

Former President Dmitry Medvedev said folding regions into Russia itself would make redrawn frontiers “irreversible” and enable Moscow to use “any means” to defend them.

The votes, in territory Russia already controls, are expected with near-certainty to go Moscow's way but are unlikely to be recognised by Western governments backing Ukraine with military and other support.

Luhansk and Donetsk together form much of the Donbas region, which has been gripped by separatist fighting since 2014 and which Putin has set as a primary objective of the Russian invasion.

In Donetsk, separatist leader Denis Pushilin said the “long-suffering people of the Donbas have earned the right to be part of the great country that they always considered their motherland.”

He added that the vote will help “restore historic justice that millions of the Russian people were waiting for.”

Pressure within Russia and from Moscow-backed leaders in Russian-controlled regions of Ukraine for votes to pave their way to becoming Russian increased in the wake of a Ukrainian counteroffensive — bolstered by Western-supplied weaponry — that is recapturing large areas of previously Russian-occupied territory.