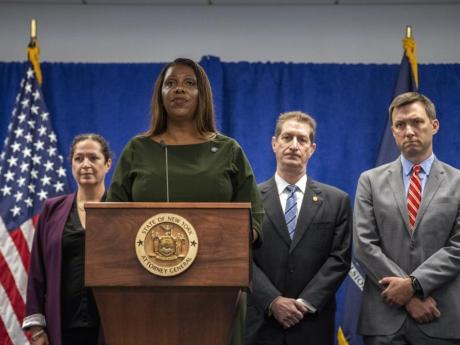 NEW YORK (AP) — New York's attorney general sued former President Donald Trump and his company for fraud on Wednesday, alleging they padded his net worth by billions of dollars by manipulating the value of prized assets including golf courses, hotels and his homes at Trump Tower and Mar-a-Lago.

Attorney General Letitia James dubbed it: “The art of the steal.”

James' lawsuit, filed in state court in New York, is the culmination of the Democrat's three-year civil investigation of Trump and the Trump Organization.

The lawsuit strikes at the core of what made Trump famous, taking a blacklight to the image of wealth and opulence he's embraced throughout his career — first as a real estate developer, then as a reality TV host on “The Apprentice” and “Celebrity Apprentice,” and later as president.

James wants Trump and his business to pay at least $250 million, which she said was the approximate worth of the benefits it got through fraudulent practices.

James, a Democrat, announced details of the lawsuit at a news conference on Wednesday. She said her office filed the case — which is civil, not criminal in nature — after rejecting settlement offers made by lawyers for the defendants.

The alleged scheme was intended to burnish Trump's billionaire image and the value of his properties when doing so gave him an advantage, such as in obtaining favourable loan terms, while playing down the value of assets at other times for tax purposes, James' office said.

“This investigation revealed that Donald Trump engaged in years of illegal conduct to inflate his net worth, to deceive banks and the people of the great state of New York,” James said at the news conference. “Claiming you have money that you do not have does not amount to the art of the deal. It's the art of the steal.”