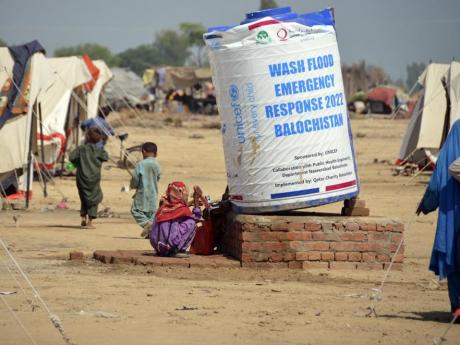 Families take refuge at a camp after leaving their flood-hit homes, in Jaffarabad, a district of Baluchistan province, Pakistan, Wednesday, September 21, 2022. Devastating floods in Pakistan's worst-hit province have killed 10 more people in the past day, including four children, officials said Wednesday as the UN children's agency renewed its appeal for $39 million to help the most vulnerable flood victims. (AP Photo/Zahid Hussain)

ISLAMABAD (AP) — Pakistan has deployed thousands of additional doctors and paramedics in the country's worst flood-hit province to contain the spread of diseases that have killed over 300 people among the flood victims, officials said Friday.

Some of the doctors who refused to work in Sindh province have been fired by the government, according to the provincial health department there. Floods have killed 724 people, including 311 children and 133 women in the province since July.

The monsoon rains and flooding, which many experts say are fuelled by climate change, have affected 33 million people, caused at least 1,596 deaths and damaged 2 million homes across Pakistan.

About half a million flood survivors are homeless, living in tents and makeshift structures.

In the past two months, Pakistan sent nearly 10,000 additional doctors, nurses and other medical staff to serve survivors at health facilities and at medical camps across Sindh province.

About 18,000 doctors and nearly 38,000 paramedics are treating survivors in the province, according to data from the health department.

Floods have damaged more than 1,000 health facilities in Sindh, forcing survivors to travel to other areas to seek medical help.