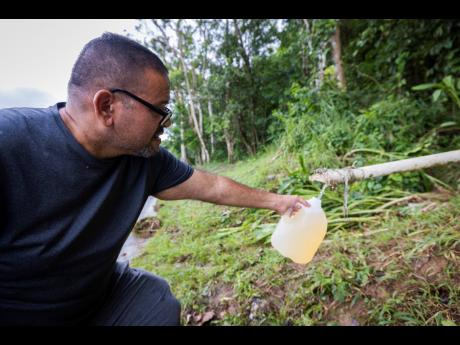 AP
A man collects spring water from a mountain in Cayey, Puerto Rico, on Tuesday, September 20.

More than a half million people in Puerto Rico remained without water service three days after Hurricane Fiona slammed into the US territory, and many spent hours in lines on Wednesday to fill jugs from water trucks while others scooped water from mountain run-off.

Sweat rolled down the faces of people in a long line of cars in the northern mountain town of Caguas, where the government had sent a water truck, one of at least 18 so-called “oases” set up across the island.

The situation was maddening for many people across an island once again left without basic services following a storm.

“We thought we had a bad experience with Maria, but this was worse,” Gerardo Rodríguez said in the southern coastal town of Salinas, referring to the 2017 hurricane that caused nearly 3,000 deaths and demolished the island’s power grid.

Fiona dumped roughly two feet of rain on parts of Puerto Rico before blasting across the eastern Dominican Republic and the Turks and Caicos Islands.

Swelled to Category 4 force, the storm was on a track to pass close by Bermuda early Friday and then hit easternmost Canada early Saturay, according to the US National Hurricane Center.

The storm played havoc with Puerto Rico’s electrical grid, which had been patched, but never fully rebuilt after Maria caused a blackout that lasted 11 months in some places.

As of Wednesday afternoon, roughly 70 per cent of Puerto Rican customers lacked electricity, according to government figures.