Fiona washes houses away, knocks out power in Canada 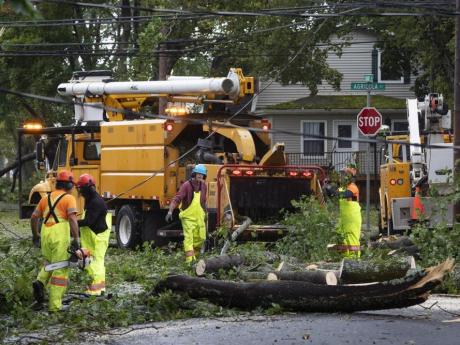 Workers clear fallen trees and downed wires from damage caused by post tropical storm Fiona in Halifax on Saturday, September 24, 2022. Strong rains and winds lashed the Atlantic Canada region as Fiona closed in early Saturday as a big, powerful post-tropical cyclone, and Canadian forecasters warned it could be one of the most severe storms in the country's history. (Darren Calabrese /The Canadian Press via AP)

HALIFAX, Nova Scotia (AP) — Fiona washed houses into the sea, tore the roofs off others, and knocked out power to the vast majority of two Canadian provinces Saturday as it made landfall as a big, powerful post-tropical cyclone.

Fiona transformed from a hurricane into a post-tropical storm late Friday, but it still had hurricane-strength winds and brought drenching rains and huge waves.

There was no immediate confirmation of fatalities or injuries.

Ocean waves pounded the town of Channel-Port Aux Basques on the southern coast of Newfoundland, where entire structures were washed into the sea. Mayor Brian Button said Saturday over social media that people were being evacuated to high ground as winds knocked down power lines.

“We've already had houses … that are washed away,” he said.

Button said anybody who has been told to leave their home needs to leave.

“I'm seeing homes in the ocean. I'm seeing rubble floating all over the place. It's complete and utter destruction. There's an apartment that is gone, that is literally just rubble,” said René J. Roy, a resident of Channel-Port Aux Basques and chief editor at Wreckhouse Press, said in a phone interview.

Roy estimated between eight to 12 houses and buildings have washed into the sea.

The Royal Canadian Police said the town of 4,000 is in a state of emergency as authorities deal with multiple electrical fires and residential flooding.

More than 415,000 Nova Scotia Power customers — about 80% of the province of almost 1 million — were affected by outages Saturday morning.

Over 82,000 customers in the province of Prince Edward Island, almost the entire province, were also without power, while NB Power in New Brunswick reported 44,329 were without electricity.