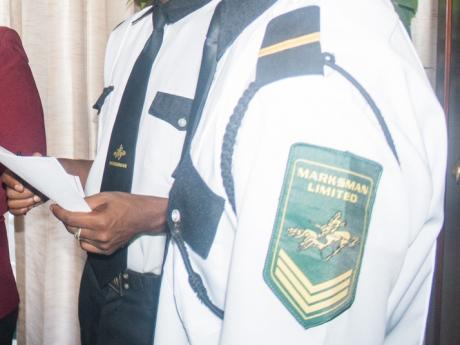 Arising from the ruling, Marksman is asserting that there will be an increase in the rates/fees to clients based on the new categorisation of security officers as employees. - Contributed photo.

Security company Marksman Limited says a Supreme Court ruling that guards engaged by the entity are employees and not contract workers will have consequences for the private security industry as well as security officers.

The landmark ruling was handed down in the Supreme Court yesterday by Justice David Batts.

Batts ruled that with the guards being employees, Marksman is liable to pay its portion of National Housing Trust (NHT) statutory contributions.

The company was ordered to begin to do so with immediate effect.

The NHT was seeking to get the company to pay $806 million in outstanding employer contributions for the period 2000-2016 but this was blocked by the judge.

Arising from the ruling, Marksman is asserting that there will be an increase in the rates/fees to clients based on the new categorisation of security officers as employees.

The company says it continues to communicate with all internal stakeholders, especially the security officers.

Marksman also sought to reassure its clients that all services will continue and clients can expect the highest standards of service as the matter is dealt with.

Since 2017, the NHT and security companies have been at loggerheads over their refusal to comply with the trust's declaration that the security guards whom they engaged are employees and not contract workers as indicated by them and as such, the businesses had an obligation to pay over two per cent of the workers' earning as contribution in addition to the company's three per cent portion.

The companies, however, have only been paying the two per cent deducted from the guards while insisting that they are contract workers and, essentially, self-employed.

But Batts, in his ruling, said while the claimant succeeded in its declaration that the security guards are not independent, he could not grant the order for damages given the passage of time.