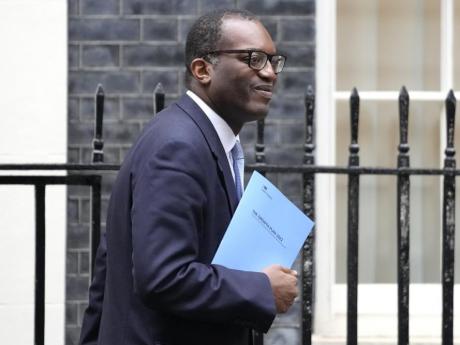 LONDON (AP) — The United Kingdom's new government outlined plans Friday to cut taxes and boost spending in an effort to bolster the faltering economy, but the high-risk moves sparked concerns that increased public borrowing will worsen a cost-of-living crisis and sent the British pound on its biggest one-day drop in 2 1/2 years.

He also said previously announced plans to cap soaring energy bills for homes and businesses would be financed through borrowing.

Kwarteng offered few details on the costs of the programme or its impact on the government's own targets for reducing deficits and borrowing, but one independent analysis expected it to cost taxpayers 190 billion pounds this fiscal year.

It triggered the pound's biggest drop against the US dollar since March 18, 2020, when then-Prime Minister Boris Johnson announced the first nationwide lockdown to control the spread of COVID-19.

Investors are concerned that government lacks a “coherent policy” at a time when the economy is facing “immense inflationary pressures,” said Susannah Streeter, senior investment and markets analyst at Hargreaves Lansdown.

“I think Kwasi Kwarteng really set off fireworks with his budget,″ Streeter told The Associated Press. “It was much bigger and bolder than expected. But the real concern on financial markets is that these widespread tax cuts are unfunded, they're going to add to the government's debt burden.″

Prime Minister Liz Truss, who took office less than three weeks ago, is racing to combat inflation at a nearly 40-year high of 9.9% and head off a prolonged recession. Facing a general election in two years, she needs to deliver results quickly.

“We need a new approach for a new era, focused on growth,” Kwarteng told lawmakers in the House of Commons.