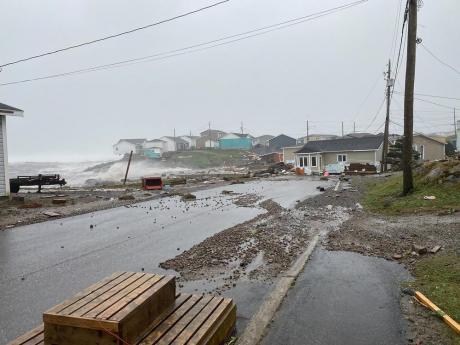 TORONTO (AP) — Hundreds of thousands of people in Atlantic Canada remained without power Sunday and officials tried to assess the scope of devastation from former Hurricane Fiona, which swept away houses, stripped off roofs, and blocked roads across the country's Atlantic provinces.

Defence Minister Anita Anand said troops would help remove fallen trees throughout Eastern Canada, restore transportation links and do whatever else is required for as long as it takes.

She didn't specify how many troops would be deployed.

Fiona was blamed for at least five deaths in the Caribbean, and while there were no confirmed fatalities in Canada, authorities on Sunday were searching for a 73-year-old woman missing in the hardest hit town of Channel-Port Aux Basques on the southern coast of Newfoundland.

“She's likely washed out to sea but we haven't been able to confirm that,” said Captain Jolene Garland, a spokeswoman for the Royal Canadian Mounted Police.

Police said the woman was last seen inside the residence moments before a wave struck the home Saturday morning, tearing away a portion of the basement.

As of Sunday, more than 252,000 Nova Scotia Power customers and over 82,000 Maritime Electric customers in the province of Prince Edward Island — about 95% of the total — remained in the dark. So were more than 20,600 homes and businesses in New Brunswick.

More than 415,000 Nova Scotia Power customers — about 80% in the province of almost 1 million people — had been affected by outages Saturday.

Utility companies say it could be days before the lights are back on for everyone.