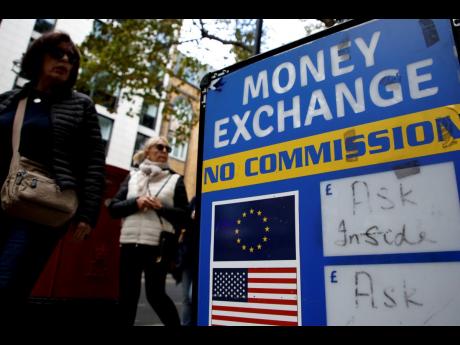 AP
People walk past a currency exchange bureau in London, on Monday, September 26.

The Bank of England sought to reassure financial markets after the British pound touched an all-time low against the United States dollar on Monday, but its entreaty fell flat for investors concerned about a sweeping package of tax cuts that further jolted a faltering economy that the government’s plan was meant to prop up.

The central bank said it was “closely monitoring” the markets and would not hesitate to boost interest rates to curb inflation. Its statement came after the pound plunged as low as US$1.0373, the lowest since the decimalisation of the currency in 1971, on concerns that tax cuts announced on Friday by Treasury chief Kwasi Kwarteng would swell government debt and fuel further inflation as the United Kingdom teeters toward recession.

The bank, which raised rates on Thursday, said it would fully assess the government’s tax and spending commitments before it meets next in November and “will not hesitate to change interest rates by as much as needed to return inflation to the two per cent target sustainably in the medium term”.

Also on Monday, the UK Treasury said it would set out a medium-term fiscal plan on November 23, alongside an economic forecast by the independent Office for Budget Responsibility.

The statements did little to ease misgivings about the government’s economic policies, with the pound dropping from US$1.0857 to US$1.0664 after they were issued. The pound had rallied from the record low earlier in the day on expectations that the central bank might take action to stabilise the currency.

The weakening pound piles pressure on the new Conservative government, which has gambled that it can slash taxes to spur economic growth while at the same time borrowing billions of pounds to help consumers and businesses struggling with soaring energy costs. Many economists say it is more likely to fuel already high inflation, push down the pound, and drive up the cost of UK government borrowing – a potential perfect storm of economic headwinds.

Kwarteng has been criticised for failing to release any independent analysis of the plans when he announced the UK’s biggest tax cuts in 50 years.

The government plans to cut 45 billion pounds (US$49 billion) in taxes at the same time as it spends more than 60 billion pounds to cap energy prices that are driving a cost-of-living crisis.

Kwarteng and Prime Minister Liz Truss, who replaced Boris Johnson as prime minister on September 6, are betting that lower taxes and reduced bureaucracy eventually will generate enough additional tax revenue to cover government spending. Economists suggest it is unlikely the gamble will pay off.

Opposition Labour Party economy spokeswoman Rachel Reeves accused the government of “a return to trickle-down economics, an idea that has been tried, has been tested and has failed”.

“They are not gambling with their money – they are gambling with yours,” she told an audience at the party’s annual conference on Monday.

The new and untested Truss also faces pressure from a nervous Conservative Party, which faces an election within two years.

Monday’s turbulence follows a three per cent fall in the pound on Friday, the biggest one-day drop against the US dollar since Johnson announced Britain’s first COVID-19 lockdown on March 18, 2020. Before that, the pound lost more than 10 per cent of its value immediately after the UK voted to leave the European Union in June 2016 before rebounding.

The sense of a government losing control led some to compare current events with September 16, 1992 – “Black Wednesday” – when a collapsing pound against the backdrop of high inflation forced the UK to crash out of the European Exchange Rate Mechanism, which was meant to stabilise exchange rates. It took the UK years to recover from the economic shock.

Kwarteng insisted that the government was acting responsibly – and said there were more tax cuts to come.