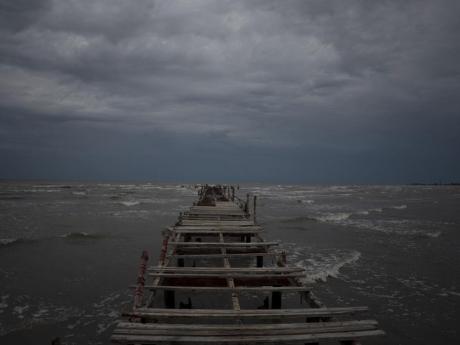 Waves kick up under a dark sky along the shore of Batabano, Cuba, September 26, 2022. Hurricane Ian is quickly gaining monstrous strength as it moves over oceans partly heated up by climate change. (AP Photo/Ramon Espinosa, File)

Hurricane Ian is quickly gaining monstrous strength as it moves over oceans partly heated up by climate change, just like 30 other Atlantic tropical storms since 2017 that became much more powerful in less than a day.

This turbo-charging of storms is likely to become even more frequent as the world gets warmer, scientists say.

After getting 67% stronger in less than 22 hours from Monday to Tuesday, Ian is bearing down on Florida as a likely Category 4 hurricane that threatens to deliver a nightmare storm surge to the Tampa Bay and southwest Florida regions.

Climate change has other effects.

The current hurricane season had been uncharacteristically mild until about a week ago because of dry air in the Atlantic. Yet while storms aren't necessarily more frequent, they are getting nastier because of global warming, experts say.

“In terms of impacts and climate change, yes, this season could be a harbinger of sort of what is to come,” said University of Albany hurricane scientist Kristen Corbosiero. “But it's really hard to say that climate change has an impact on any one storm in terms of its formation or its individual intensity.”

The National Hurricane Center defines rapidly intensifying storms as those that gain at least 35 mph in wind speed in less than 24 hours. Sudden changes can cause major problems for forecasters and emergency planners trying to help residents get out of harm's way.

In Ian's case, the meteorological conditions were so obvious that forecasters were warning about it days in advance.

While hurricane seasons fluctuate year-to-year, the 10-year running total of Atlantic and Eastern Pacific storms that rapidly intensified at some point during their life cycle increased by 35 percent between 1980 and 2020, according to an analysis of National Hurricane Center data by The Associated Press.

From 2017 to 2021 there have been 30 rapidly intensifying storms in the Atlantic and 32 in the Eastern Pacific.