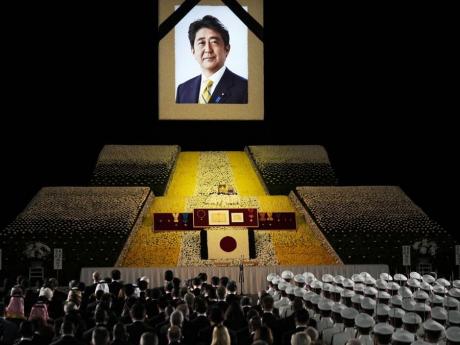 A portrait of former Japanese Prime Minister Shinzo Abe hangs on the stage during his state funeral, Tuesday, September 27, 2022, in Tokyo. Abe was assassinated in July. (Franck Robichon/Pool Photo via AP)

TOKYO (AP) — Japan's assassinated hawkish former leader, Shinzo Abe, was given a rare state funeral Tuesday that was full of military pomp and surrounded by throngs of mourners as well as by widespread protests, with thousands taking to the streets in opposition.

It began with Abe's widow, Akie Abe, in a black formal kimono, walking slowly behind Kishida into the funeral venue, carrying an urn in a wooden box wrapped in a purple cloth with gold stripes.

Soldiers in white uniforms took Abe's ashes and placed them on a pedestal filled with white and yellow chrysanthemums and decorations.

Attendants stood while a military band played the Kimigayo national anthem, then observed a moment of silence before a video was shown praising Abe's life in politics.

It included his 2006 parliamentary speech vowing to build a “beautiful Japan,” his visits to disaster-hit northern Japan after the March 2011 tsunami and his 2016 Super Mario impersonation in Rio de Janeiro to promote the 2020 Tokyo Olympics.

Kishida, in a 12-minute eulogy, praised Abe as a politician with a clear vision for post-World War II economic growth who promoted national security, the development of Japan and the world and a “free and open Indo-Pacific” as a counter to China's rise. Kishida also noted Abe's trademark phrase of from the postwar regime” under the

Abe was cremated in July following a private funeral at a Tokyo temple days after he was assassinated while giving a campaign speech on a street in Nara in western Japan.

Tokyo was under high security for the state funeral, especially near the venue, the Budokan martial arts hall.

At a protest in downtown Tokyo, thousands of people marched toward the hall, some banging drums and many shouting or holding banners and signs stating their opposition.