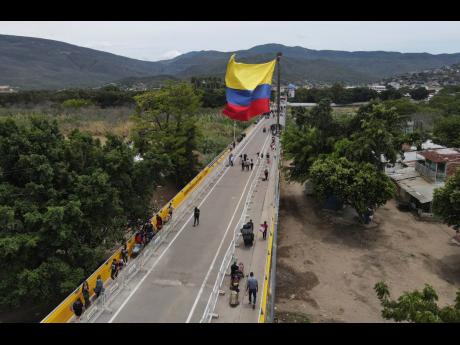 Fernando Vergara
Pedestrians use the Simon Bolivar International Bridge to cross between San Antonio, Venezuela, and Cucuta, Colombia, on Sunday, September 25. The Simon Bolívar and Francisco de Paula Santander international bridges will once again connect legal trade between Colombia and Venezuela as of Monday.

Venezuela’s government on Monday rejected a report by independent experts working with the United Nations’ top human-rights body, who alleged President Nicolas Maduro had personally ordered the detention of government opponents, who endured electric shocks, asphyxiation and other cruel acts while in custody.

Hector Constant Rosales, Venezuela’s ambassador in Geneva, rejected the report released last week by the experts working for the UN’s Human Rights Council as a “pseudo report” that masked “obscure interests” opposed to the South American country. The government had not previously responded to the report – the third in a series from the council’s fact-finding mission on Venezuela.

Speaking to the council, Constant blasted the “terrible politicisation” of the 47-member-state body, saying the report “this time goes beyond the limits of the unspeakable, incorporating direct accusations against the president and other high authorities of my country”.

The latest report revealed new details on a string of rights violations – including possible crimes against humanity – under Maduro’s tenure, and presented accusations against members of his inner circle, such as ruling party leader Diosdado Cabello.

It also said Maduro had ordered torture in some cases, but provided no details of specific instances. The fact-finding mission’s leader, Marta Valiñas, told AP last week that such a conclusion was reached based “on different but consistent testimonies”.

The evidence gathered by the UN-backed experts could one day be used by the International Criminal Court or by any country that might apply “universal jurisdiction” to prosecute alleged crimes against humanity.

The mission was established in 2019, and its mandate was later extended until this month. The council has not yet voted on extending the work of the mission, whose two previous reports highlighted steps that the Venezuelan government has taken to repress any real or perceived opposition.

The earlier reports raised concerns about Venezuela’s judicial system and detailed crimes like extrajudicial executions, enforced disappearances, arbitrary detentions and other acts carried out by Venezuelan authorities since 2014, the year after Maduro took office following the death of President Hugo Chavez and a complex crisis took hold in the country.