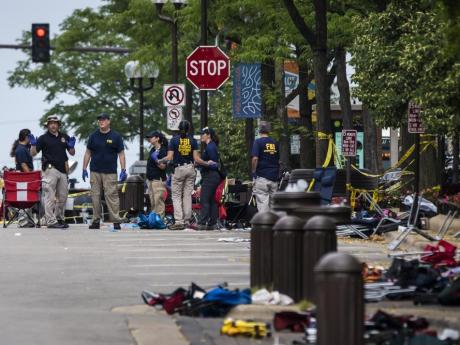 Members of the FBI Evidence Response Team Unit investigate in downtown Highland Park, Illinois, on July 5, 2022, the day after a deadly mass shooting at a Fourth of July Parade. According to a lawsuit filed Wednesday, September 28, 2022, in Illinois, the gunmaker Smith & Wesson illegally targeted young men at risk of violence with ads for firearms, including the 22-year-old gunman accused of opening fire on the Independence Day parade in suburban Chicago and killing seven people. (Ashlee Rezin/Chicago Sun-Times via AP, File)

CHICAGO (AP) — The gun-maker Smith & Wesson illegally targeted young men at risk of violence with ads for firearms — including the 22-year-old gunman accused of opening fire on an Independence Day parade in suburban Chicago and killing seven people, according to several lawsuits filed Wednesday in Illinois.

The lawsuits filed by people wounded while attending the Highland Park parade and the estates of several victims are the latest bid by victims of mass shootings to hold gun manufacturers accountable, despite broad protections for the industry in federal law.

Liz Turnipseed is among those filing lawsuits in Lake County on Wednesday against the gun manufacturer, the accused shooter and his father, along with two gun sellers.

In an interview with The Associated Press, Turnipseed said she had recently arrived at the parade with her husband and three-year-old daughter, pointing out to the girl instruments in the high school band.

She fell to the ground after being shot in the pelvis and remembers seeing her daughter's stroller on its side and asking her husband to get their daughter to safety.

Turnipseed said she required weeks of intense wound care, expects to need a cane for some time and is in therapy for post-traumatic stress disorder.

She also was forced to delay an embryo transfer scheduled for July 12; her doctors now fear it's dangerous for her to become pregnant.

Turnipseed's lawsuit largely focused on the company that produced the M&P 15 semiautomatic rifle that authorities identified as Crimo's weapon.

Smith & Wesson officials should have known that its advertising campaigns would appeal to a dangerous group of customers — “namely impulsive young men with hero complexes and/or militaristic delusions attracted to using the particularly high lethality of AR-15 style weapons ... to effectively execute their fantasies,” her attorneys argue.

Representatives for Smith & Wesson, based in Springfield, Massachusetts, did not immediately respond to messages seeking comment Wednesday.