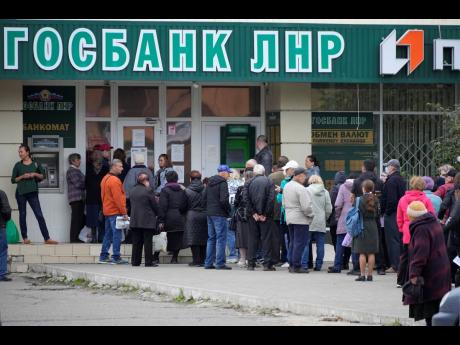 Russia positioned itself Wednesday to formally annex parts of Ukraine where occupied areas held a Kremlin-orchestrated “referendum” on living under Moscow’s rule that the Ukrainian government and the West denounced as illegal and rigged.

Armed troops had gone door-to-door with election officials to collect ballots in five days of voting. The suspiciously high margins in favour were characterised as a land grab by an increasingly cornered Russian leadership, after embarrassing military losses in Ukraine.

Moscow-installed administrations in the four regions of southern and eastern Ukraine claimed Tuesday night that 93 per cent of the ballots cast in the Zaporizhzhia region supported annexation, as did 87 per cent in the Kherson region, 98 per cent in the Luhansk region and 99 per cent in Donetsk.

Pro-Russia officials in the four regions said they would ask Russian President Vladimir Putin to incorporate their provinces into Russia on the basis of announced vote results. Separatist leaders Leonid Pasechnik in Luhansk and Denis Pushilin in Donetsk said they were leaving for Moscow to settle the annexation formalities.

Ukraine’s Foreign Ministry called the balloting “a propaganda show” and “null and worthless”.

“Forcing people in these territories to fill out some papers at the barrel of a gun is yet another Russian crime in the course of its aggression against Ukraine,” it said.

Western countries also dismissed the balloting as an attempt by Moscow to legitimise its invasion of Ukraine launched on February 24.

“Regardless of Russia’s claims, this remains Ukrainian territory and Ukraine has every right to continue to fight for their full sovereignty,” said White House spokeswoman Karine Jean-Pierre.