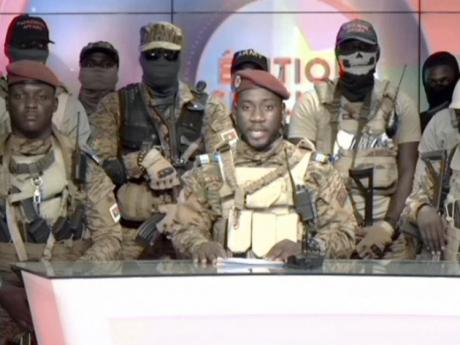 In this image from a video broadcast by RTB state television, coup spokesman Captain Kiswendsida Farouk Azaria Sorgho reads a statement in a studio in Ougadougou, Burkina Faso, on Friday evening, September 30, 2022. (RTB via AP)

A statement read by a junta spokesman said Captain Ibrahim Traore is the new military leader of Burkina Faso, a volatile West African country that is battling a mounting Islamic insurgency.

Burkina Faso's new military leaders said the country's borders had been closed and a curfew would be in effect from 9 p.m. to 5 a.m.

The transitional government and national assembly were ordered dissolved.

Damiba and his allies overthrew the democratically elected president, coming to power with promises of make the country more secure.

However, violence has continued unabated and frustration with his leadership has grown in recent months.

“Faced by the continually worsening security situation, we the officers and junior officers of the national armed forces were motivated to take action with the desire to protect the security and integrity of our country,” said the statement read by the junta spokesman, Capt. Kiswendsida Farouk Azaria Sorgho.

The soldiers promised the international community they would respect their commitments and urged Burkinabes “to go about their business in peace.”

“A meeting will be convened to adopt a new transitional constitution charter and to select a new Burkina Faso president be it civilian or military,” Sorgho added.

Damiba had just returned from addressing the UN General Assembly in New York as Burkina Faso's head of state.

Tensions, though, had been mounting for months. In his speech, Damiba defended his January coup as “an issue of survival for our nation,” even if it was ”perhaps reprehensible” to the international community.