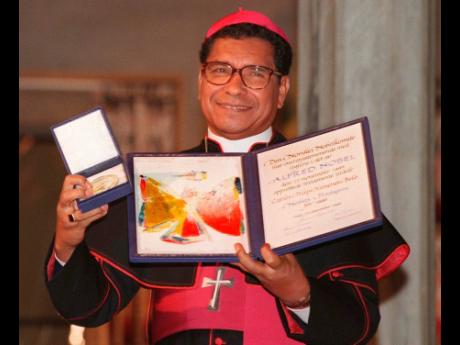 The Catholic Church’s decades-long sex abuse scandal caught up with a Nobel Peace Prize winner on Thursday, with the Vatican confirming that it had sanctioned the East Timor independence hero, Bishop Carlos Ximenes Belo, following allegations that he sexually abused boys there during the 1990s.

The Vatican admission came a day after a Dutch magazine, De Groene Amsterdammer, exposed the claims against the revered Catholic bishop, citing two of Belo’s alleged victims and reporting there were others who hadn’t come forward in East Timor, where the church wields enormous influence.

Spokesman Matteo Bruni said the Vatican office that handles sex abuse cases received allegations “concerning the bishop’s behaviour” in 2019 and within a year had imposed the restrictions. They included limitations on Belo’s movements and his exercise of ministry, and prohibited him from having voluntary contact with minors or contact with East Timor.

In a statement, Bruni said the sanctions were “modified and reinforced” in November 2021 and that Belo had formally accepted the punishment on both occasions.

The Vatican provided no explanation, however, for why St John Paul II allowed Belo to resign as head of the church in East Timor two decades early in 2002, and why church authorities permitted him to be sent to Mozambique, where he worked with children.

News of Belo’s behaviour sent shockwaves through the heavily Catholic, impoverished Southeast Asian nation, where he is regarded as a hero for fighting to win East Timor’s independence from Indonesian rule.

“We are here also in shock to hear this news,” an official at the archdiocese of Dili in East Timor said Thursday, speaking to AP on condition of anonymity.

De Groene Amsterdammer said two alleged victims, identified only as Paulo and Roberto, reported being abused by Belo and said other boys were also victims. It said its investigation showed that Belo’s abuse was known to the East Timorese government and to humanitarian and church workers.

“The bishop raped and sexually abused me that night,” Roberto was quoted as telling the magazine. “Early in the morning, he sent me away. I was afraid because it was still dark. So, I had to wait before I could go home. He also left money for me. That was meant so that I would keep my mouth shut. And to make sure I would come back.”

Belo won the Nobel Peace Prize in 1996 with fellow East Timorese independence icon Jose Ramos-Horta for campaigning for a fair and peaceful solution to conflict in their home country as it struggled to gain independence from Indonesia, a former Dutch colony.

The Norwegian Nobel Committee, in its citation, praised Belo’s courage in refusing to be intimidated by Indonesian forces. The committee noted that while trying to get the United Nations to arrange a plebiscite for East Timor, he smuggled out two witnesses to a bloody 1991 massacre so they could testify to the UN human rights commission in Geneva.

The Nobel Committee declined to respond to the allegations on Thursday, other than to say it generally doesn’t comment on past laureates. An exception came recently when the committee rebuked its 2019 winner, the Ethiopian prime minister, over the war and humanitarian crisis in the Tigray region.