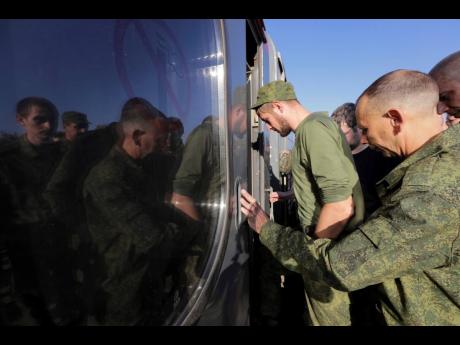 Uncredited
Russian recruits take a train at a railway station in Prudboi, Volgograd region of Russia, on Thursday, September 29. Russian President Vladimir Putin has ordered a partial mobilisation of reservists to beef up his forces in Ukraine.

Russia planned to annex more of Ukraine on Friday in an escalation of the seven-month war that was expected to isolate the Kremlin further, draw it more international punishment, and bring Ukraine extra military, political and economic support.

The annexation — and planned celebratory concerts and rallies in Moscow and the occupied territories — would come just days after voters supposedly approved Moscow-managed ‘referendums’ that Ukrainian and Western officials have denounced as illegal, forced and rigged.

Kremlin spokesman Dmitry Peskov told reporters on Thursday that four regions of Ukraine — Luhansk, Donetsk, Kherson and Zaporizhzhia — would be folded into Russia during a Kremlin ceremony attended by President Vladimir Putin, who is expected to give a major speech. Peskov said the regions’ pro-Moscow administrators would sign treaties to join Russia in the Kremlin’s ornate St George’s Hall.

In an apparent response, Ukrainian President Volodymyr Zelenskyy called an emergency meeting on Friday of his National Security and Defense Council.

The US and its allies have promised to adopt even more sanctions than they’ve already levied against Russia, and to offer millions of dollars in extra support for Ukraine as the Kremlin duplicates the annexation playbook it followed when it incorporated Ukraine’s Crimean Peninsula in 2014.

Ukraine has repeated its vows to recapture the four regions, as well as Crimea. For its part, Russia pledges to defend all its territory — including newly annexed regions — by all available means, including nuclear weapons.

Heightening the tensions are Russia’s partial military mobilisation and allegations of sabotage of two Russian pipelines on the Baltic Sea floor that were designed to feed natural gas to Europe. Adding to the Kremlin’s woes is Ukraine’s success in recapturing some of the very land Russia is annexing and problems with the mobilisation that President Vladimir Putin acknowledged on Thursday.

Ukraine’s Western supporters have described the stage-managed referendums on whether to live under Russian rule as a bald-faced land grab based on lies. They say some people were forced to vote at gunpoint in an election without independent observers, on territory from which thousands of residents have fled or been forcibly deported.

In unusually strong language, UN Secretary General Antonio Guterres told reporters on Thursday in New York that Russia’s annexation would violate the UN Charter and has “no legal value”. He described the move as “a dangerous escalation” and said it “must not be accepted”.

“Any decision by Russia to go forward will further jeopardise the prospects for peace,” Guterres said.

As a veto-wielding permanent member of the UN Security Council, Russia bears “a particular responsibility” to respect the UN Charter, the secretary general said.